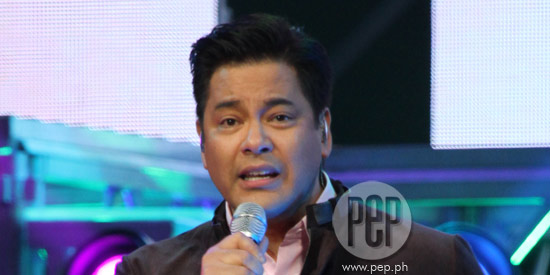 When he returned to hosting a late night talk show, Martin Nievera already anticipated that he will be compared to other popular TV hosts.

Martin's new weekly talk show called Martin Late @ Night premiered on ABS-CBN last March 1. In this episode, he had KC Concepcion as his guest as she shared her observations about Sarah Geronimo during their trip to Brazil. (CLICK HERE to read related article)

During those times, the singer-TV host recalled, “Ever since I started a late night talk show, I’ve always been compared to Johnny Carson, David Letterman, and Jay Leno.

“They’re my idols. They’re the ones I studied.”

Being compared to these personalities is okay for Martin. However, Martin admitted that he might not be able to accept it if he would be compared to local talk show hosts.

Martin never thought of making a career in hosting a TV show until he was tapped to pinch-hit for Edu Manzano.

“That’s when I fell in love with that concept,” he remembered.

Since then, his shows have become a hit among viewers.

“But to compare me with the local ones that came after me, that’s not right.”

The singer-composer was proud to say that he had somehow started a trend in local talk shows.

“When I came into the picture, the other shows like Jojo Alejar’s show [The Medyo Late Night Show With Jojo A aired on TV5], to this day he openly says that he copied my show.”

Since Martin took a long break from doing talk shows, he admitted that there are elements that he used to tap that he can't use anymore.

He mentioned, “Look now, I can’t even use my old microphone anymore. Jojo is using it.

“Even Ted Failon’s Failon Ngayon uses that for its logo.

“I can’t use my own microphone because ang tagal kong nawala.

For his new show, Martin realized he had to create a new concept on “how you should end your night” for Martin Late @ Night, which airs every Friday on ABS-CBN.