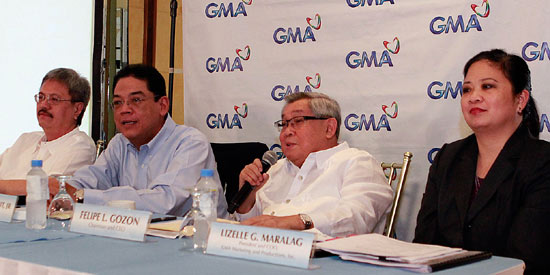 "At the end of the period, the Network managed a seven percent growth in airtime sales to P12.703 billion that comprises 91 percent of its gross revenues.

"For 2013, GMA Chairman and CEO Atty. Felipe L. Gozon said that the company is expected to deliver better financial results as evidenced by its strong financial performance at the opening of the year.

“The first two months have been exceptionally strong with GMA Channel 7 hitting an all time high in February alone,” declared Gozon. “We intend to keep this momentum as we anticipate sustained revenue growth across all platforms.”

"GMA’s flagship channel Channel 7 drove the increase in 2012 as it registered a seven percent rise in incremental sales due to its consistent nationwide leadership across the year.

"This was supported by revenues from Regional TV, the business unit that oversees GMA’s regional TV operations, which climbed a significant 25 percent, as a result of various expansion and improvement efforts in different areas nationwide. Leading local news channel GMA News TV, on the other hand, gained a modest two percent increase in its top line on its second year of operations, while airtime revenues from Radio dropped three percent.

"GMA International, which manages the operations and distribution of the Network’s international channels, sustained the subscriber uptake of its flagship channel GMA Pinoy (GPTV) and its lifestyle channel GMA Life TV (GLTV) that grew 13 percent to 329,108 and nine percent to 124,884, respectively, at the period’s closing. However, subscription and advertising revenues from GMA International fell a tad short by 0.9 percent due to the appreciation of the Peso but discounting the impact of the forex fluctuation, international sales slightly grew by two percent.

"Meanwhile, earnings from subsidiaries climbed 14 percent coming from external sources but mainly from Digify, Inc., GMA New Media’s new techno-creative lab that provides technology-based solutions to other companies, which generated bulk of the net increase in this category.

"GMA Films’ co-produced entry to the 2012 Metro Manila Film Festival Si Agimat, Si Enteng, at si Ako raked in almost P98 million in gross receipts, while Julie Anne San Jose’s self-titled album by GMA Records clinched a Double Platinum Record Award from its combined physical and digital sales of almost 38,000 units for the period August 15, 2012 to December 15, 2012. San Jose’s carrier single titled “I’ll Be There” gained over 245,000 downloads for the same period, which earned for it a Platinum Digital Single Award. According to PARI, San Jose is the very first recipient of this award.

"The company saw a seven percent increase in its total operating expenses (OPEX) for the year to P9.593 billion owing primarily to the upsurge in the amortization of program rights in order to further diversify and strengthen its programming.

"The rise in OPEX also came from the increase in depreciation charges from the commissioning of the state-of-the-art Media Asset Management System (MAMS) that allows the Network to migrate to a tapeless, file-based workflow in the last quarter of 2011, along with massive investments for the launch of multi-million peso originating stations in Ilocos Norte (GMA Ilocos) and Naga City (GMA Bicol) in 2012.

"Furthermore, general and administrative expenses (GAEX) rose by 12 percent due to the disbursement of several employee bonuses compounded by the growth in the Network’s manpower headcount.

:GMA thus ended 2012 with earnings before interest, taxes, depreciation and amortization (EBITDA) of P3.397 billion, reaching a double-digit gain of 10 percent year on year. However, due to the rise in OPEX, net income after tax settled at P1.617 billion, a decline of five percent versus a year ago.

"In an effort to further widen its reach and bring quality programs to viewers around the country this 2013, the Network continues to allot multi-million pesos worth of investments for its continuous expansion projects. Last January, GMA opened its Cagayan de Oro-based originating station dubbed GMA Northern Mindanao, which covers 1.4 million TV households - the second widest coverage by a GMA station next to Mega Manila. This is also in line with GMA’s intensive preparations for Eleksyon 2013 – the Network’s special coverage of the forthcoming mid-term elections, which is touted to be the biggest and widest one undertaken by GMA.

"GMA International is also set to deepen the penetration of its channels in 2013 with the launch of GMA Pinoy TV, GMA Life TV and GMA News TV-International with more affiliates in Canada, US, the Middle East, Europe, and the Asia Pacific regions.

"For the full year 2012, GMA led rival networks in nationwide ratings for the second year in a row based on data from the industry’s more widely recognized ratings service provider Nielsen TV Audience Measurement.

"GMA also ruled across all dayparts in the important areas of Urban Luzon and Mega Manila, which make up 77 and 59.5 percent, respectively, of the total urban television population in the country.