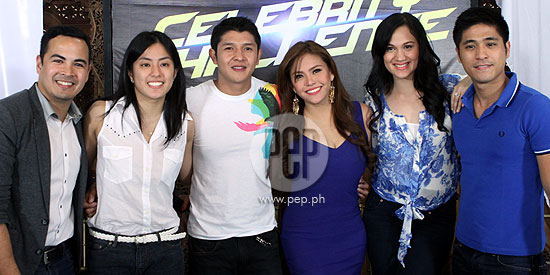 GAME ON: The Chevrolet Sonic Celebrity Challenge will air on April 6 and 13 at 6:00 pm on Studio 23.

Although Melissa was initially hesitant to join for fear that she and Paul Jake might get into petty fights, she says about the experience, “It’s a good experience lalo na kaming dalawa na we did something challenging together.”

When Gretchen Ho was asked to recount her “game on” moments, she admitted, “Probably when we were selling the buko pies.

“Kasi nung ginawa namin 'to, paano ba namin mabebenta yung buko pie for a higher price? And stopping all the cars and forcing them to buy something na, di ba…

“So what we did, we really stopped the cars tapos sabi namin, libreng TV coverage 'to at may kasamang pagmamahal.

Manuel Chua agreed with his teammate Gretchen Ho. He added, “That was the most challenging, selling the buko pies. Kasi at first we didn’t know where to sell it or to whom we should sell it.

Andrei Felix revealed the toughest challenge for him, “I think yung circuit training.

“Each member had to do a specific training for upper, lower body and core.

Who will come out victorious in the end: Team Sonic Blue or Team Sonic White? Find out when GAME ON airs on Studio 23 this April.