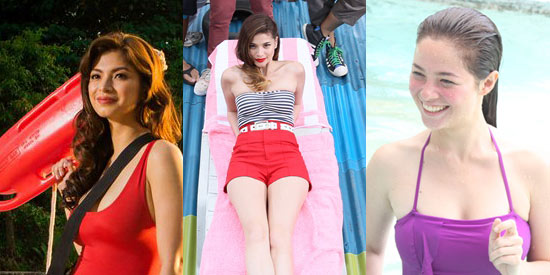 "ABS-CBN takes you to a fun trip down memory lane beginning this Sunday (April 7) when it premieres the highly-anticipated 2013 Summer Station ID on ASAP 18 that will showcase over hundreds of the biggest Kapamilya stars who will relive Filipinos’ fondest summer memories by recreating television programs that truly made a mark in their hearts for the past 60 years.

"Dubbed as “Kwento ng Summer Natin,” this year’s summer station ID is the story of every Pinoy’s summer and will awaken old memories of summers gone by, rekindle long forgotten emotions as well as make new happy memories that will last a lifetime.

"Go back in time with Piolo Pascual and Bea Alonzo in full '50s garb, accompanied by the ABS-CBN Philharmonic Orchestra led by Maestro Gerard Salonga.

"Enchong Dee and Maja Salvador then travel to the 60s and have big dancing shoes to fill as they portray the very iconic tandem in The Nida and Nestor Show.

"Pokwang, on the other hand, dons the iconic '80s tangga ala Alma Moreno in LoveliNess, while former real-life partners Rayver Cruz and Cristine Reyes team up as the iconic '80s duo of Tonight with Dick and Carmi.

"The sexy chicks of It's Showtime, Anne Curtis, Karylle and Coleen Garcia sunbathe ala Chika Chika Chicks. They are joined by naughty onlookers Jhong Hilario, Jugs, Teddy and Kim Atienza.

"John Lloyd Cruz re-enters the '90s era and revisits his Tabing Ilog days with a new woman by his side.

"Goin’ Bulilit may be today’s favorite kiddie gag show, but back in the 90s, there was Ang TV. Angelica Panganiban then joins the Goin’ Bulilit kids as they recreate the iconic “Esmyuskee” skit.

"Some of today’s sexiest stars--Diether Ocampo, Jericho Rosales, Jake Cuenca, Matteo Guidicelli, Jason Abalos and Angel Locsin--make a splash in their lifeguard uniforms, a throwback of the popular show Baywatch that will relive the time when ABS-CBN was still airing U.S. syndicated programs.

"The Asianovela that started it all, Meteor Garden, also comes back to life as Kim Chiu and Xian Lim fill in the roles of San Chai and Dao Ming Su, while one of the most successful telenovelas of all time, Maria Mercedes, gets a 2013 remake as Jessy Mendiola takes on the role first made famous by Mexican star Thalia.

"ABS-CBN’s impact on Pinoy pop culture is not only limited to television shows but covers music, too. Groove to old dance hits – “Otso Otso,"“Katawan” (the theme from Palibhasa Lalake) and “Pinoy Ako."