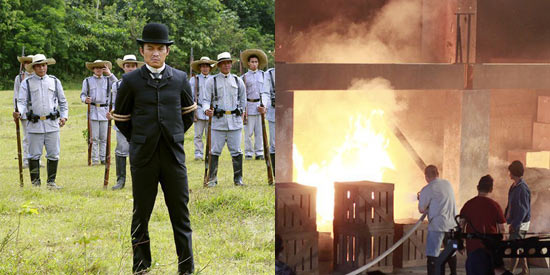 Some TV viewers might have been waiting for GMA-7 to release a full-length summer station ID apart from the “cup stacking” on-air plugs being aired on the Kapuso Network. But instead, viewers were treated to a new “Lupang Hinirang” video that was launched on April 9, the day when the Philippines celebrates Araw ng Kagitingan.

GMA has found an outlet for creativity, artistry and inspiration through its Philippine national anthem videos.

In 2010, GMA made a cinematic version of “Lupang Hinirang” that won international awards including a Bronze World Medal at the prestigious 54th New York Festivals International TV & Films Awards.

The 2010 version showed beautifully shot and excellently designed recreation of the most important and critical moments of Philippine history, featuring GMA-7’s talents as they portrayed national heroes and iconic personalities.

This 2013, GMA decides to not use its celebrities, a very different approach from its previous video and especially the ones produced by ABS-CBN (which is always a Kapamilya casting coup). Without the star power and the celebrity pull, does the 2013 version have the same impact as its predecessor?

It does. GMA’s 2013 “Lupang Hinirang” does not rely on celebrity fanfare to achieve its objectives. Its goal is simple: to prove that heroism is innate among Filipinos, and that the concept of heroism adapts to the changing times.

The intention is to pay tribute to modern Filipino heroes who are continuing the tradition of heroism in our history – and that is easily conveyed and understood through simple and familiar scenarios that most viewers can relate to.

The 2013 version opens with animation showing the face of heroes such as Lapu-lapu, Apolinario Mabini, and Gabriela Silang, among others.

The opening scene features Andres Bonifacio meeting with Katipuneros before they fought valiantly in battle.

Time passes by and viewers are brought to contemporary times when a fireman is depicted saving a baby from a burning building. However, the scene is highly stylized and looks too contrived. Given the amount of material in GMA-7’s archives, they could have used actual footage of heroic citizens who showed bravery in the midst of such disasters. It would have been more effective if they showcased everyday heroes in real life—not just on reel.

These can easily be displayed through sappy cinematic clichés that touch the emotions but it’s great that GMA chose not to focus on the drama and hardships of labor, but instead emphasized the honor and greatness in performing one’s duties to the best of one’s abilities.

It shows a teacher sharing her knowledge to her students, a farmer tilling the land with a plow while under the heat of the sun, and a doctor serving famers in the countryside. There is even a boxer featured briefly, which subtly reminds viewers of the Pambansang Kamao Manny Pacquiao.

There are plenty of scenes depicting OFWs working in construction sites in the Middle East and nurses who care for the elderly abroad.

As the national anthem is ending with its line “ang mamatay ng dahil sa yo,” a re-enactment of Jose Rizal’s martyrdom is shown onscreen.

Most people, especially those who belong to the workforce, may be inspired by this video to do their best in their own fields, not just for the sake of self and family, but also for the good of the country. What’s good about showing powerful and relatable modern-day life vignettes in a national anthem video is that it gives the words of our hymn new meaning – meaning that we can easily understand in these modern times.

Relevance, meaning and a powerful message – these qualities make this production great. It helps us realize that our national anthem is more than a string of Filipino words that we routinely sing during flag ceremonies.

“Lupang Hinirang” is a song that can still speak to us in these modern times, encouraging Filipinos to always fan the flames of heroism in all of us.


What can you say about GMA-7's "Lupang Hinirang" video? Share your thoughts in the comments section below.