Sarah Geronimo says variety show helped her mature as a performer and "as a girl who is now a woman." 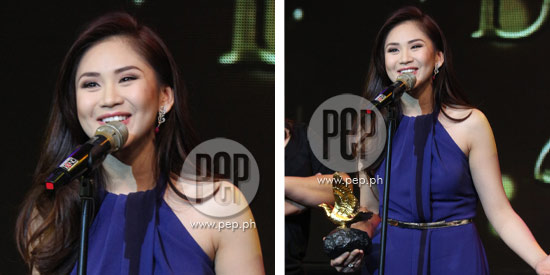 "Personally po, malaki ang naging tulong sa akin ng pagkakaroon ng sariling variety show para mag-mature, hindi lang as a performer but
also as a person and as a girl who is now a woman. Naks!"

She then encouraged the audience to watch her movie, It Takes a Man and a Woman, after watching the third installment of Iron Man.
When Sarah was interviewed after she accepted her award, she was asked if she wants to have another variety show in the future.
She admitted: "Mahirap po kasi magkaroon ng sariling musical variety show. Isa po tayong concert performer at bilang concert performer, kailangan ponatin ng time para makapag prepare ng magandang show everytime lumalabas tayo onstage. Kailangan rin i-consider yun."

Sarah was seated at the left side of the Star Theater and when Gerald Anderson arrived, he was seated on the right side of the venue.
When asked if Sarah had the chance to interact with Gerald, shemotioned as if walking away as she said, "Halika na."
She mentioned that she had a colorful journey while she was hosting Sarah G Live. Was Gerald a part of that colorful journey?
Sarah did not answer directly and tried to leave the venue already.
However, she paused when she was asked regarding her latest movie It Takes a Man and a Woman, which has already overtaken Praybeyt Benjamin.