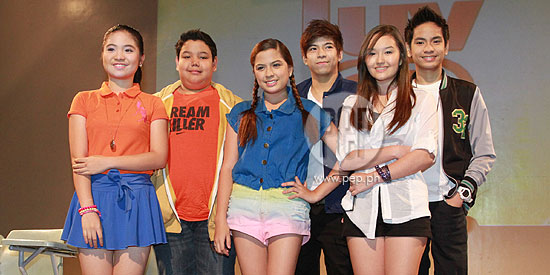 The former child stars are now up for bigger challenges by accpting a slightly more mature roles compared to their stint in the kiddie gag show.

Although it took a little while to get a new project, Sharlene said she never lost interest in showbiz, “kasi gusto ko po talaga ang ginagawa ko.”

For his part, Nash said that with his new role in LUV U, “hindi naman po ako masyadong nag-adjust.

Jairus, who was once known as the best friend of child superhero Super Inggo (played by Makisig Morales), also said the same thing about portraying a new role.

The new members of LUV U were introduced during a press conference held last Wednesday, June 5.

The show’s director, Frasco Mortiz, gave the media a little background of the show, which started airing in February 2012.

In LUV U, the characters of Miles Ocampo, Angeli Gonzalez, Kiray Celis, Rhap Salazar, Ella Cruz, and CJ Navato have graduated and gone to college, which is why they will no longer be seen in the TV series. They were part of Goin' Bulilit before they joined LUV U.


Only Igi Boy Flores will remain in ABS-CBN's youth-oriented show.

According to Direk Frasco, the story of the newbies would be lighter than the first batch.

The new batch will start their fun-filled stay in LUV U starting this Sunday, June 16, after ASAP 18.