Game of Thrones concludes with a shocking climax this June 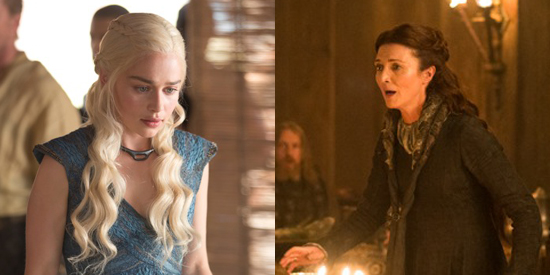 What will be the fate of Daenerys Targaryens (left) and Catelyn Stark (right)? Find out in the season finale of Game of Thrones on June 22 and 29.

The Emmy® and Golden Globe-winning HBO Original Series Game of Thrones approaches the final stages of its third season with a shocking penultimate episode—"The Rains of Castamere"—premiering Saturday, June 22, at 9pm exclusively on HBO and HBO HD. The season finale, "Mhysa," airs the same time the following week on June 29.

In the wildly anticipated and intensely shocking episode, "The Rains Of Castamere," Robb Stark presents himself to Walder Frey and Edmure Tully meets his bride. Meanwhile, Jon Snow faces his harshest test yet and Bran Stark discovers a new gift. Tensions run deep in Daenerys Targaryens’s camp as Daario Naharis and Jorah Mormont debate on how to take Yunkai. And finally, House Frey joins with House Tully.

The season finale, titled "Myhsa," wraps with Joffrey challenging Tywin. Bran tells a ghost story. In Dragonstone, mercy comes from strange quarters, and Daenerys waits to see if she is a conqueror or a liberator.

Based on the bestselling fantasy book series by George R.R. Martin, Game of Thrones is an epic story of honor, ambition, love, and betrayal, set against the backdrop of the continent of Westeros.

Game of Thrones airs every Saturday at 9pm on HBO / HBO HD.