Sarah Geronimo reveals why she became a breadwinner, Bamboo looks back on his days as a shoe salesman 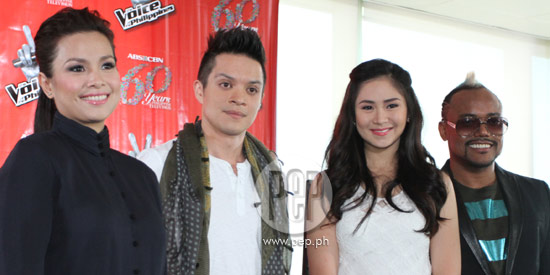 The Voice of the Philippines mentors—(L-R) Lea Salonga, Bamboo, Sarah Geronimo and Apl de Ap—went through a lot of hardships before becoming big names in the music industry.

Before they became world-renowned singers, they were ordinary people with big dreams.

Mic Test: The Voice of the Philippines Primer, which was recently aired on ABS-CBN, featured the hardships that the four coach-mentors went through before penetrating the entertainment scene.

The Voice of the Philippines is the local version of The Voice, previously seen in the United States, United Kingdom and other parts of the world. Talpa is responsible for bringing the franchise here in the country. International consultant Philibert Braat will be here to monitor the progress of the competition. He says, “Filipinos are the best singers in the world. This country deserves to be in The Voice. It’s gonna be international standard. Be amazed by the voice. There’ll be great voices.”

As the host of Mic Test, singer-actress Toni Gonzaga had a chat with each of the mentors as they looked back on their early days as a performer.

Apl.de Ap narrated: “I grew up poor. I learned to plant with my grandfather…masaya pa rin kahit mahirap pa rin."

He then revealed that he was afflicted with Nystagnus, which is characterized by involuntary, rapid and repetitive movement of the eyes. Apl admitted, "The eye muscle is never steady. It’s hard to focus on far things. Those challenges became my blessings."

When Apl was 14, he left for the United States and was adopted by an American lawyer. He pointed out it was not a bed of roses for the Black Eyed Peas when they started out in the music scene. He recalled: “We submitted demos…[we had] dreams…kept practicing. My goal: it was always for my family…”

The Filipino-American singer said, “I do have a lot of experiences to share to people… I’m Filipino and I want all the talent of the Filipino to be heard all over the world.”

Sarah admitted that she was apprehensive about accepting the position as judge-mentor in The Voice.

Rock icon Bamboo Mañalac was the third Voice coach featured in the primer. Bamboo grew up in the U.S. before making a mark in the Philippine music scene. He recalled that growing up in the United States wasn’t easy.

Bamboo commented that he was a regular guy while living in the U.S. He led a normal life and took on a job as a shoe salesman. “I’m a working shoe salesman, nagbenta ako ng sapatos. Napaka-proud ko. Yung year na 'yon, no pride at all. Walang drama. You just gotta do what you have to do. You have to feed your family. At nanalo pa ako ng award na Rookie of the Year. 'Yan ang greatest achievement ko.

“Being here today, iba na yung priorities ko. It comes with age. It comes with life. Experience lang talaga. Gaano ako ka blessed in my position in doing what I’m doing. These days, 24/7, nasa music ako. That’s what I live and breathe. Mentality ko…Just keep everything fresh. Keep everything new. Keep smiling,” he said as he gave his advice to the aspiring singers.


International Broadway star Lea Salonga was the fourth coach featured on the primer. As a young girl, she didn’t think she would be pursuing a singing career.

"Nangyari ang big lightbulb moment when I was in church with my mom in London. It was in the middle ng run ng Miss Saigon. At that point I wasn’t sure if ito na talaga na magiging kapalaran.Ang sinabi lang ng pari sa homily, lahat tayo ibiniyaya ng Diyos ng kanya-kanyang gift o talent. Gamitin mo yung ibinigay sa yo. Oh my God, that was for me…I became more focused….I looked at my career as a whole. Everything led to one piece and the next. Sa Miss Saigon talaga, natanggap ko ang pinakamalaking break, yun talaga nag-umpisa. I guess you can call it my international career. That was certainly the biggest break ever.”

Looking back, Lea believes that making it big abroad paved the way for her to be noticed in her home country.

“Parang di ako masyadong na-aappreciate ng mga tao sa Pilipinas and the kind of voice that I have. Parang I have to have a certain voice to be appreciated—my own—and that’s what I felt. I don’t know if it’s true or not. I moved to the U.K. I needed to be a success in the U.K. so I could be appreciated in my own country, which is why it is so nice to be part of this show.”

The international star feels very grateful with her new role as a coach. “I feel extremely thankful that I was asked to be part of The Voice. I really, really want to be part of it. “

V reporter Robie Domingo and Toni’s sister, Alex Gonzaga, then summarized the competition guidelines. They also mentioned that auditions for “The Voice” were held via radio and online.


There are 3 rounds of competition namely Blind Auditions, The Battles and Live Shows.

If two or more coaches press the red button, the coaches will have to “persuade” the artist. It is the artist who will decide which team he wants to be with. If no chairs turn, the artist auditioning has to exit from the competition.


THE BATTLES is the second stage of the competition. Each coach should have 12 artists to be grouped in pairs. Each pair has to perform a song together. The coach has a special co-mentor who will guide and prepare the pair for each performance. The artists can freely choose their respective singing parts so both of them can “shine” in their performance.


During each performance, the coaches will decide which one among the pair will be taken out or will continue with the competition. The remaining artists will proceed with the LIVE SHOWS stage.


Each artist will be asked to do individual performances. An artist will either remain or exit the competition based on the decision of the coaches and the public.


Only one artist shall remain with each coach. They will compete with each during the grand finals until one emerges as winner of The Voice of the Philippines.


For the four coaches, they are looking for the artist who is “kakaiba, may star quality,” who has “stage presence,” “emotional,” and has “showmanship.”


The Voice of the Philippines will air on ABS-CBN starting this Saturday, June 15.