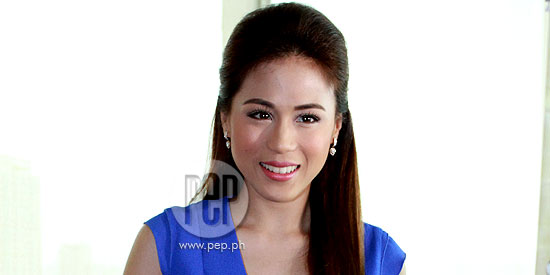 Toni Gonzaga is the host of ABS-CBN’s new “reality cooking show,” Kuwentong Buhay, Kuwentong Kusina. A newbie cook in real-life, the actress/host says she does not aim to be like MasterChef Pinoy host Judy Ann Santos or Karinderiya Wars host Marvin Agustin. Toni tells PEP.ph, “I’d rather be myself. I’d rather offer what I can offer than try to follow someone else&am

Toni Gonzaga, 29, sees it fit that she should know how to cook by now.

The actress/TV host recently took it upon herself to learn cooking simple dishes like soup and pasta, as well as baking pastries.

It was last year when her boyfriend, filmmaker Paul Soriano, enrolled her at the CCA (Center for Culinary Arts) as an anniversary gift.

It was Toni who requested that Paul not give her an expensive bag or a pair of shoes because it was pointless to be given something she can get herself. She said she wanted something different.

It was to her surprise that her boyfriend of almost seven years surprised her with a crash course at the said culinary school.

Toni appreciated the gift, of course. If anything, it was the perfect present since she was bent on acquiring a skill apart from hosting and acting.

“[It’s] not because I want to have a family already, but because it’s something na hinahanap ko na rin bilang babae.

It is fortunate that a year after taking cooking lessons, the candid Toni lands a hosting stint for a new reality cooking show called Kuwentong Buhay, Kuwentong Kusina.

COOKING SHOW FOR THE SOUL. The latest ABS-CBN show, to be aired Sunday mornings from 9:30 to 9:50, will feature real-life stories of individuals from all walks of life.

Kuwentong Buhay, Kuwentong Buhay, as the title suggests, will not only tackle gastronomic delights and how to prepare and cook them, but will also tie these kitchen specialties with inspiring tales about family and friendships.

For its first episode, which airs this Sunday, June 23, Kuwentong Buhay, Kuwentong Kusina will feature the life of Rommel and how he thanks Brother Joe, the person who took Rommel in as family.

With the assistance of Filipino chef Gene Gonzalez, the founder of the Center for Asian Culinary Studies, the pilot episode will talk about cooking a special Filipino dish: the “Kare-kare Solinap.”

TONI TO COPY JUDAY OR MARVIN? It cannot be helped that Toni will be compared to the likes of actress/celebrity chef Judy Ann Santos, host of MasterChef Pinoy as well as actor/entrepreneur Marvin Agustin, host of TV5’s Karenderiya Wars.

At the press conference, Toni dismissed the notion of copying Judy Ann or Marvin. To begin with, their shows are different from each other.

Trying to emulate someone you’re not does not work, according to Toni.

“You can only be yourself and never be somebody else.

“So, I’d rather be myself, I’d rather offer what I can offer than try to follow someone else’s footsteps…

For now, Toni is bent on learning the various dishes that her new show will feature in future episodes.