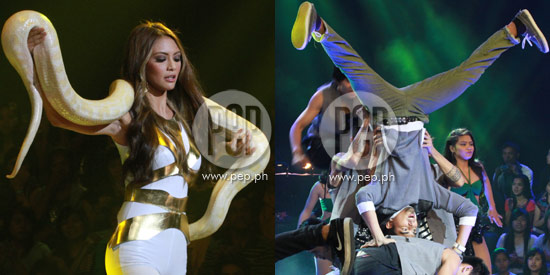 Sam Pinto appeared on Sunday All Stars with an albino snake wrapped around her shoulders. Mark Herras (right frame) emerged as the Best Performer during the June 16 pilot episode of GMA-7's new Sunday variety show. (View photos: Sunday All Stars kicks off on GMA-7)

When Party Pilipinas—GMA-7’s former Sunday noontime variety show—abruptly ended its run, many were surprised. But not everyone feared for the future of its hosts and resident stars.

After all, they’ve seen the farewell scene previously in its other noontime show called SOP. When SOP went off air, almost everybody came back to its new reincarnation Party Pilipinas or PP. It was a case of “same show, different name.”

It almost happened again in the new offering Sunday All Stars, which aired its pilot episode last Sunday, June 16.

But this time, although most—if not all—stars are returnees, GMA-7 injected a variation in the format. Their Sunday concert TV has become a competition between four groups that aim to outperform each other with their production numbers.

If you're familiar with That’s Entertainment, German Moreno’s star-making playground in the nineties, you know how this works.

(View photos: Sunday All Stars kicks off on GMA-7)

Sunday All Stars debuted last Sunday, after a few weeks of PP’s absence. Is it a worthy replacement? Will it be able to topple its perennial rival ASAP of ABS-CBN? Here’s what we observed during its pilot episode:

First, let’s talk about the title. When ASAP first came into television, they clearly promoted it as an “All Star Sunday Afternoon Party,” thus the name. Now, they name its newest competitor Sunday All Stars (SAS)...a little too similar perhaps? But still, the name is a kind of weak. Both its full form and the SAS abbreviation lack punch. At least Party Pilipinas had character. SOP was memorable.

Secondly, the format isn't very original. This is Saturday Entertainment (the weekend edition of That’s Entertainment, reloaded). The Big 4—Ogie Alcasid, Regine Velasquez, Janno Gibbs and Jaya—have been given roles as mentors and judges. The rest of the younger talents were assigned into 4 groups, each having a team leader (who will served for a period of one month).

As pointed out by the Big 4, the strength of this format is in arousing the talents’ competitive spirit. Everybody will be on their toes, no time for complacency.

As we witnessed in the first episode, all four teams obviously brainstormed and prepared for their respective production numbers. Teamwork and solidarity were highlighted, with individual singers and dancers contributing their own respective strengths and skills to form one grand presentation.

This will be beneficial to artists who have always been backup singers and/or dancers in the previous format. It can be seen that the members all received exposure, allowing them to make full use of their abilities.

This format disproves naysayers claim that there is a lack of talent in the Kapuso Network's Sunday variety show. It seems the artists just need a worthy venue to showcase their skills and talents.

As seen in last Sunday’s episode, if given a chance, singers other than the usual frontliners can actually soar. When given time under the spotlight, some artists previously perceived as just “pacute or patweetums” can actually be fierce on the dance floor.

The members of La Diva have been broken up and although their fans will their triumvirate, this is a chance for Jonalyn Viray, Aicelle Santos, and Maricris Garcia to shine and showcase their individual styles.

But Sunday All Stars should be wary about going overboard. There is such a thing as going over the top and we feel that in the coming weeks, as competition becomes more intense, these groups will be tempted to rely on gimmickry more than artistry. There’s a danger for subtle yet moving performances to be forgotten and deemed unecessary in their quest to impress judges and viewers. We also worry about the effect of intense competition on these young artists. In Sunday’s show, most of the performers looked exhausted, and it was only the first week.

Yes, the performances last Sunday were great. But Janno Gibbs had a point when he said performances need to be cohesive. Every ingredient of the performance must contribute to a single theme or message. A good production number theme is one that needs not to be explained. Performances must convey a message instead of just putting songs together like a chopsuey of today’s most crowd pleasing songs. Maybe it will help if they set a theme to be followed by ALL groups.

Sunday All Stars has a lot of promise. But it’s better if the groups work harder to achieve originality and creativity. When Sam Pinto of Ligang iLike came out carrying an albino snake was a clear imitation of a very iconic music awards show performance, and for all its boldness, it did not connect to the rest of the performances of the group.

We also recommend revisiting the competition guidelines. 50 percent of the votes come from the Big Four while 50 percent of the scores is determined by public voting. In last Sunday’s show, right after the first group’s performance, group number 4 (Tweet Hearts) was already topping the Facebook poll with over a thousand votes—and no one has ever seen them perform yet. This is clearly personality-based voting, and not based on performance.

Another suggestion, since they’ve named the groups after social networking sites, why not make the show more interactive as well? Show real-time Twitter feedback. Give Facebook users control on which songs they want performed or themes they want interpreted.

We’ll see how Sunday All Stars pans out in the coming weeks. But for now, we’ve seen how they attempted to deviate from their previous show.


Yes, it’s a show of the same cast, but it’s good that it’s no longer dominated by the usual suspects.

In Sunday All Stars, everyone has a part.