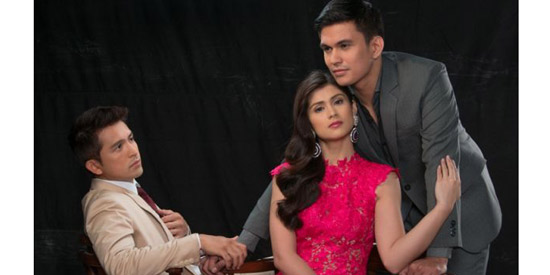 My Husband’s Lover is progressive—a unique creation in today’s media landscape where gay men are mostly relegated as sidekicks. This GMA-7 teleserye is topbilled by (L-R) Dennis Trillo, Carla Abellana, and Tom Rodriguez.

My Husband’s Lover tells the story of Lally (Carla Abellana), a conservative young woman who has been married to Vincent (Tom Rodriguez) for 10 years. Little does she know that Vincent has homosexual tendencies, and that he had a boyfriend before their marriage. When Vincent meets Eric (Dennis Trillo) again, they regain their old flame, forcing Lally to fight for her marriage.

What’s most admirable is how the show looks polished. It feels like a lot of brainpower went into the preparation of the show. Some elements are borderline meticulous, like choosing to add a variety of gay characters to battle the gay stereotype head-on. There’s Vincent (Tom), a closet gay who fathers two children; Eric (Dennis), the discreet but out gay; and Danny (Kevin Santos), the effeminate gay best friend.

And unlike other shows that only depicts homosexual men as lustful beasts, or as sidekicks in crass, laughable situations, My Husband’s Lover shows its gay characters in normal, everyday situations: going to the gym, working in an office, or relaxing at home. The characters have successful lives not as beauticians or stand-up comedians, but as architects and businessmen.

Kudos should go to screenwriter Suzette Doctolero and director Dominic Zapata for taking on this bold project.

Acclaim should also go to the brilliant cast, particularly to Tom Rodriguez and Dennis Trillo, who look good together. Sparks fly whenever they are together on screen, making their romantic relationship all the more believable. Tom and Dennis are shown having romantic trysts along a seaside boulevard and they also experience moments of jealousy.

Carla Abellana plays her character safely—mild-mannered, well-meaning, and a bit naïve. It also seems like she does not have chemistry with Tom Rodriguez, but that may be intentional.

Despite all these positive aspects, My Husband’s Lover cannot be given full marks yet. The show may have started on right footing, but it still remains to be seen if it can sustain its quality.

For one, the show is structured in the point of view of the wife, hence the title. Carla Abellana’s character also peppers the show with her narration, thereby framing the events in her point-of-view. This narrative choice feels suspect, as the wife is shown to have a conservative outlook. This could be seen as a way of placating viewers who might not be able to accept this project, especially in a predominantly Catholic nation such as the Philippines.

Viewers may be convinced to view the show’s upcoming events in Carla's point of view, demonizing the gay characters once the affair blows up.

My Husband’s Lover is progressive—a unique creation in today’s media landscape where gay men are mostly relegated as sidekicks who provide comic relief. Let’s hope that MHL continues to present homosexuals far from their cliché images on television.