TV5 new president Noel Lorenzana on the network war: “You have to earn the right to be number one…” 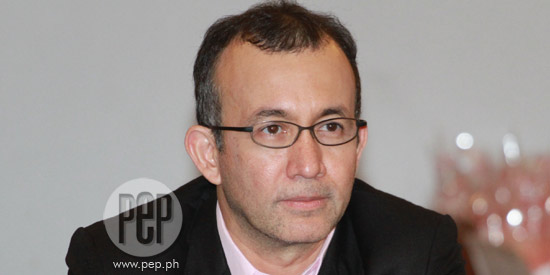 “You have to earn the right to be number one…” said Noel Lorenzana, the new president of TV5, about winning the fierce network competition.

That's why “growth” is his primary concern for the Kapatid network.

“For you to grow as a human being, you need to be productive… a productive person.

“If you’re not productive, you don’t have the right to grow.”

FOUR YEARS. When he got on board last June, TV5 chairman Manny Pangilinan had one directive: “turn it around… in four years.”

Three months later, the status is “still in red,” he described, before underscoring, “but we’re better this year.”

Sounding confident in a collected manner, he added, “But you know, we want to do it earlier.”

By saying “we,” he also meant the work force.

Hence, he’s made it as one of his priorities, setting a “destination people could work towards to.”

The UP Chemical Engineering alumnus elaborated, “It has to give people meaning and purpose, e.

“You have to believe in it. You give people hope.

“When you show victory, it changes the whole atmosphere.”

He was referring to the FIBA Asia 2013 coverage, which dominated the ratings game from August 10 to 11—according to Nielsen Media Research’s Mega Manila TV Audience Measurement or MEGATAM.

A few months back, the tittle-tattle was, a massive resignation took place.

He and Wilma Galvante, chief entertainment content officer, neither confirmed nor denied this when PEP.ph (Philippine Entertainment Portal) raised the question during their intimate press conference last September 2.

But the latter said, those who resigned were given early retirement package.

Going back to the four-year goal, Lorenzana knows they still have a long way to go. But he’s not daunted by the challenges.

“Life is not exact… But don’t be scared by it. Accept your limitations.”

The guy who once served as the chairman and managing director of Unilever Malaysia and Singapore, and became the president of NutriAsia shared one his realizations: “The broadcast industry is a long-term thing.”

And it’s a good sign that “TV5 is moving up in terms of people’s, what do we call it, energy.”

When asked to name their strengths: “We’re young, we’re dynamic, we’re hungry. There are things we can do that others can’t.”

As for their weakness, “We’re young, we’re newbie.”

And his strategies seem to take the slow-but-sure route.

“CONTENT THEN TALENT.” Instead of going head to head with the two TV giants—GMA-7 and ABS-CBN—in terms of primetime viewing during weekdays, TV5 chose to revamp its primetime shows on weekends.

The following day, a star-studded line-up will start livening up the viewers’ Sunday evenings: Aga Muhlach on Pinoy Explorer, Vic Sotto on Who Wants To Be A Millionaire, Joey de Leon on Wow Mali Pa Rin, and Sharon Cuneta and Ogie Alcasid on The Mega and The Songwriter.

All of them spell F-U-N!

Lorenzana said, “…we want to be younger, not totally, not seemly young because then you know, it will alienate…”

He’s looking at offering “shows that are relevant to the advertisers” as well.

Hence, offering huge talent fees to stars of the other networks may not be in the offing.

Part of his plans with Galvante is to make its talent arm produce stars.

“You know, we have a lot of young, promising talents. It’s just a matter of lift—getting them, pushing them.

“Sometimes, for a young talent to actually make it, we need to attach them to an older talent, right?

“It’s not about age, because you know, I always say when U2 has a concert, they’re in their 50s, look at the audience.

“Because they’re rock stars. Rock stars are ageless, and the whole point is, you know, I think the people we have are in the rock-star genre.

TEN THINGS ABOUT HIM. What made MVP think he’s the man for his network? Read on...

1. Aside from finishing Chemical Engineering in University of the Philippines in Diliman, he also took programs at Kellogg School of Management in Illinois, Massachusetts Institute of Technology (MIT) in Boston, and Ashridge Business School in the U.K.

2. Before joining TV5, he was the executive vice president and head of Consumer Wireless Division at Smart Communications.

3. His bubble thought after accepting the job from MVP: “Did I make the right decision?”

Lorenzana resumed, “Most of my career is in challenges— with Unilever, Nutriasia, Smart—all those were challenges, and a lot were turn around situations.”

5. As the president of a TV network, he was suddenly thrust into the limelight. How is he taking this? “You need to stay out of it for you to stay in it. Otherwise if you’re in it, you can never be objective about it.”

6. First Day High, which launched the movie careers of Kim Chiu and Gerald Anderson was his brainchild.

The film, he remarked, “became the biggest-grossing youth-oriented film, it even beat Bagets.”

7. Add to this was Close To You, another movie on brand “made money.”

With much enthusiasm, he said, “…we’re gonna do it again.”

8. He wants to push for “responsible entertainment,” and “how TV5 will actually be a good force of change for the better.”

To this, Lorenzana said, “So the past was about bringing somebody down, maybe the future is about [pushing] the country up.”

And yesterday, September 8, he turned a year older. Happy Birthday!