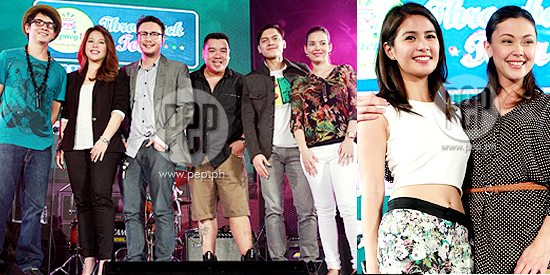 True to the “throwback” fashion it conducts itself as an archive cable channel, Jeepney TV mounted a reunion concert that gathered several of ABS-CBN’s former child and teen stars.

Leading the ensemble of Tabing Ilog and Ang TV cast at the event were actresses Jodi Sta. Maria and Kaye Abad, whose candid banter on stage displayed the bond they have kept since their Tabing Ilog days.

Of course, the two actresses have beautifully matured before the camera and have exhibited their acting prowess in teleserye lead roles for the ABS-CBN network. Jodi’s character Maya in the top-rater Please Be Careful With My Heart has re-launched her career into new heights. Kaye, on the one hand, has revamped herself as a sultry actress whose sweet, girl-next-door image has been replaced by the villain role she gets to play, more recently seen in the soap remake of Annaliza.

Tabing Ilog cast member Baron Geisler, two-time Cinemalaya best actor, made quite a presence at the event as well.

Also present at the event was actress Desiree del Valle, who displayed riveting acting in the defunct soap My Little Juan.

Completing the nostalgic feel of the event was the distinct music of the ‘90s. Ballad hitmaker Freestyle sang their feel-good singles “‘Til I Found You” and “This Time.” OPM’s soulful South Border proved their timelessness when audience members sang along with them and swooned to “Kahit Kailan,” “Love of My Life,” and “Ikaw Nga.”

The sweet-voiced Barbie Almalbis performed songs that captured the sentimental vibe of the concert. The singer/guitarist/songwriter performed “Torpe,” “Money for Food,” and “Tabing Ilog,” of course, which just about made the audience wistful but happy to reminisce those good old days.