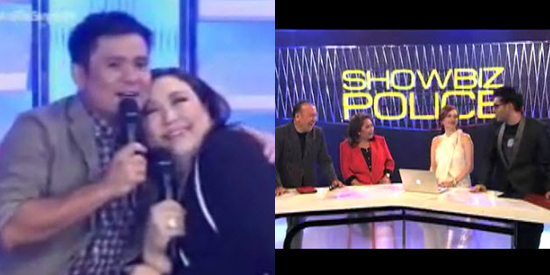 Now that this rainy weather has us staying in bed and in front of the TV during weekends, TV5’s newly launched block dubbed “Weekend Do It Better” comes at a perfect time. For one thing, it’s a good mix of shows that can be considered an antidote to the weekday selection of news and soap operas. Generally, these eight programs are all light shows that are good for relaxing when you want to keep the TV on while you’re puttering aimlessly around the house.

Several programs are making a comeback that only shows they have proven their appeal. For me, the stand-outs in the Kapatid Network are: What’s Up, Doods?, Pinoy Explorer, Wow Mali Pa Rin, Who Wants to be a Millionaire? and The Mega and the Songwriter.

There are some areas for improvement, but the lineup is generally a good combination for R&R during the weekend.

Now, here are our mini-reviews of what TV5 has dubbed as “Weekend Winners”:

What’s it all about? A glossy gossip show with a panel of hosts that converge at a studio in front of a live audience. Also features recorded segments

Timeslot: Every Saturday at 6 pm

Strengths of the show: Since the show is only an hour-long, it avoids the pit that most other gossip shows on Philippine TV fall into; that is, delving too much on each issue or controversy.

Lucy Torres-Gomez brings her poise and calm demeanor to the fast-paced show. Lucy’s Desk looks to be a forum for intimate one-on-one discussions with the host. Her interview with Edu Manzano served as the heart of the September 14 episode. Direk Joey Reyes is authoritative and funny, especially in his commentary about sex video scandals.

Hiccups of the show: It feels like this has all been done before. The swift switch from one camera angle to another and then another is very confusing and honestly, unnecessary. This was most annoying during the Direk’s Statement segment. By distracting the audience with the sudden shifts, the show in effect downplayed Direk Joey’s very well-grounded insights.

Suggestions for the show: With jazzy set and equipment, it will be a challenge for the production to resist the temptation to overuse the glitz. But it will be to show’s advantage if it invested more on extensive research and tight editing. Shade of these are already apparent. Content should take precedence of razzle-dazzle so Showbiz Police rises above the fray.

What’s it all about? Gag show with an ensemble of comedians

Timeslot: Every Saturday at 7 pm

Strengths of the show: The Battle of the Brainless segment is the strongest and funniest. This may be due to its awareness of current events and issues. The costumes and props for the Zombee Shooters segment were well-executed. The Beking News, a spoof of newscasts using gay lingo and slang had its moments.

Hiccups of the show: There were more misses than hits in the pilot episode. Ogie’s spoof of Ryzza Mae was awkward and really not funny, despite having a Janet Napoles rip-off as guest. Overall, the rest of the show essayed more “ngek!” comments than laughs.

Suggestions for the show: There is obviously a lot of potential as there is a lot of comic talent on the show. It falls upon the comedy writers to come up with better scenarios and better jokes that will not fall flat. Among the various segments, however, only Battle of the Brainless is worth continuing. Care must be taken, however, not to use it to the extent of overkill.

What’s it all about? American reality show where karaoke meets extreme adventure dare: the contestants must not stop singing despite the different challenges that they undergo throughout the length of the song. Six contestants go through a variety of challenges before the top three (chosen by members of the studio audience) go into the finals where they sing while on a giant turntable and the last person standing wins.

Timeslot: Every Saturday at 8 pm

Strengths of the show: Filipinos love karaoke and the extreme dares are interesting enough to hold their attention.

Hiccups of the show: We hope they select challenges that are more relevant or more relatable to Pinoys.

Some of the challenges seem too dangerous that make them quite unwatchable. particularly the Cactus Maze, wherein the singer wears drunk goggles, impairing his vision, with balloons attached to him, down a path dotted with cacti.

Suggestions for the show: Killer Karaoke has enough music and hair-raising dares to keep people interested. But there should be variety in the dares, otherwise, it will get old very fast.

Title of show: WHAT’S UP, DOODS?

What’s it all about? A talk show with some extras like a chance for Edu Manzano to try a different blue collar job every episode. The show has an interactive aspect by soliciting viewers’ personal videos and stories.

Timeslot: Every Saturday at 9 pm

Strengths of the show: The set is cozy and pleasant. Edu proves that he is indeed one of the best talk show hosts in the country. His deadpan delivery and tongue-in-cheek humor is on target. His camaraderie with his in-studio guests, the DJs collectively called Boys’ Night Out and Georgina Wilson, were fun and engaging. On this Saturday night line-up, it is the best show. The show is also very well-researched.

Suggestions for the show: The show is very enjoyable and a perfect end to a TV-watching night. Hopefully, the show continues to carve a niche for this kind of talk show.

What’s it all about? Travel-adventure show

Timeslot: Every Sunday at 6 pm

Strengths of the show: The September 15 episode brought viewers to New York. The editing is excellent as it goes from as frenetic and rapid as the city, to very laidback as Aga and guest co-host Derek Ramsay head to Lake George and Saratoga for an experience of “the other side of New York.” I like the comparison between statistics about the United States and the Philippines in order to let the audience appreciate facts better; e.g. the size of Luzon compared to the size of New York as well as prices of items converted to Philippine peso. The production value of the show is very impressive.

Hiccups of the show: Some of the statistics or trivia that are displayed on the screen are exposed for too short a time to be read in their entirety.

Suggestions for the show: Although it is understandable that the cost of the items and services would be very expensive, the show could feature more affordable adventures for its protagonists. This, considering the demographics of its audience.

Title of show: WHO WANTS TO BE A MILLIONAIRE?

What’s it all about? The tenth season of the hit game show has a few new modifications, including two new lifelines and two kinds of money trees.

Timeslot: Every Sunday at 7 pm

Strengths of the show: The show retains its edge-of-seat excitement as it asks a variety of questions from current events to history and science. The set and lighting effects are still stellar. Vic Sotto tempers his comic persona to become an effective games master.

Suggestions for the show: I noticed that calls for contestants include performances during auditions—this seems inappropriate, though I can only surmise it is to increase the “entertainment value” of the show. I hope the show will uphold the intellectual nature of the game show.

What’s it all about? The most enduring prank show on Philippine television returns.

Timeslot: Every Sunday at 8 pm

Strengths of the show: The pranks are generally very amusing and entertaining—of course, it is so for us who are watching them. The situations are fresh and good social experiments, from the bulol TV reporter who interviews TV5 celebrities to the child taxi driver to the sexual harassment set-up.

The set for Joey’s spiels is very well-lit and well laid-out. The interactive component, encouraging viewers to post videos of their own pranks is also a nice touch. Having Joey introduce the next show, The Mega and the Songwriter, is also a good promotional tool.

Hiccups of the show: Not all the gags were amusing, however. The 2025 segment is supposed to be futuristic but the jokes were forced. The prank on a mom who is made to believe that her married son is actually gay is a little sensitive, as the woman could have been adversely affected by it. Some people might find this hilarious while others might find this prank a bit overboard.

Suggestions for the show: Pranks on celebrities are always enjoyable for us members of the masa since they show a glimpse of their humanity.

Title of show: THE MEGA AND THE SONGWRITER

What’s it all about? Musical show featuring the talents of Sharon Cuneta and Ogie Alcasid and live bands. They also feature a number of musical guests who drop in for a chat and to perform as well.

Timeslot: Every Sunday at 9 pm

Strengths of the show: Sharon and Ogie show that their talents are at their best. They sing and banter like good friends do, and, as they keep saying, it’s the first time that they are doing a show together. The blending of their voices and personalities are refreshing and at some point, when they were sitting together with former band fronters Luke Mejares, Medwin Marfil, Jinky Vidal, and Top Suzara, it made me feel as if I was listening in on a conversation happening in their living room.

Aside from featuring established musicians, they also open lines of communication to aspiring singers. They encourage viewers to upload videos of themselves since the show is looking for the next POST (Philippine Online Sensation on TV), providing a venue for Pinoy online video talents.

Through various social media, viewers can send song requests to Sharon; they can also share their stories that could possibly inspire Ogie to write a song.

Hiccups of the show: For me, it felt like the show ran too long.


PEPsters, what are your thoughts on the new shows of TV5? Feel free to share your observations in the comments section.