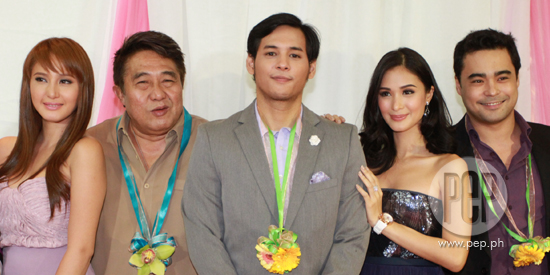 Known for being strict and meticulous, the award-winning director is said to be feared by the stars he worked with.

He jokingly complained, however, that it’s a different case this time because the cast of his new soap jive so well it’s hard to restrain them on the set.

“Maaaring hirap mo sila i-bring together, but when they perform they give their best, which benefits the whole production at nakakabawas ng trabaho para sa director,” he stated during the press conference held last Tuesday night, September 17.

Direk Maryo revealed the challenges that they went through while taping the teleserye.

He added that it wouldn’t be possible if not for the full cooperation of his stars.

“Ang galing nila. They’re very professional and they know how to give credit and perform well.”

STARS SPEAK. For their part, the stars of Magkano Ba Ang Pag-ibig were all praises of Direk Maryo’s style in bringing out the best in each of their characters.

Sid Lucero is challenged by the fact that he’s working with an acclaimed director. “Oo, may takot. When you’re working with someone of this calibre, whatever you deliver you just want to be at par with his expectations. If you want to look for a pat at the back, you’re not gonna get it. So, he kind of leaves you hanging. But it’s also his way of showing that he's comfortable with you. It’s actually an honor.

FAMILY DRAMA. Conceptualized by Direk Maryo himself, Magkano Ba Ang Pag-ibig? tells the story of Eloisa Aguirre (Heart Evangelista), a provincial lass struggling to make ends meet for her family. She crosses paths with Dona Hilaria Villasanta (Celia Rodriguez) who takes an instant liking to her and offers her a job in a factory. Unbeknownst to Eloisa, the wealthy matriarch secretly wants her to marry her mentally challenged son, Bobby (played by Dominic Roco).

Direk Maryo further explained that he wanted to create a soap that tackles the dynamics of a regal matriarch with her daughter in-laws. “Ang arko ay kwento ng isa sa mga manugang, which is portrayed by Heart as Eloisa. Siya pumasok sa household ng pamilya. The dynamic starts there. There’s another family that relates with them.”

Conflict arises when Eloisa falls in love with Lucio (Sid Lucero), who happens to be the disinherited son of Dona Hilaria. “Makikita n’yo yung kwento that evolves around her love between the original love [Lucio] and this one [Bobby] that is forced to her, which blossoms into another kind of love. So, magiging parang love triangle kaya lang may kapansanan at kondisyones, which is very intriguing.”