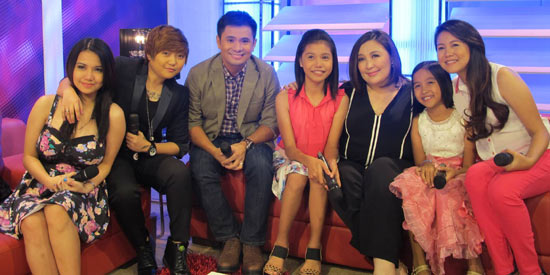 The Mega and the Songwriter hosts Ogie Alcasid and Sharon Cuneta are joined in this photo by Alyssa Quijano, Charice and the Colon Sisters.

As part of TV5's new primetime block dubbed “Weekend Do It Better,” the Kapatid Network aired the pilot episode of The Mega and the Songwriter last Sunday, September 15.

It features the power combination of Megastar Sharon Cuneta and Songwriter Ogie Alcasid in one musical variety show for the first time ever.

The format of the show is fairly simple: the two stars showcase their talents while inviting different OPM artists for performances and quick interviews. This failsafe strategy combines with a move that is sure to generate mass appeal: they also opened the show as the platform for the next Philippine Online Sensation on TV (POST).

Starting out with Sharon and Ogie singing Daniel Padilla’s song, "Nasa 'Yo Na Ang Lahat" with guest star Abra, the 1.5 hour pilot episode soon became a mini-concert of songs from the hottest pop music to the '90s classics.

In keeping with their theme of finding the next POST, their first guest was Charice Pempengco, the ultimate poster child of online sensation fame. Charice catapulted into the international music scene after her YouTube video earned her a feature on The Ellen Degeneres’ Show and Oprah.

According to Sharon, Charice is their first feature on the "Playlist," the segment where they invite their viewers’ favourite artists over for songs and some banter. Charice didn’t fail to please with her renditions of Celine Dion’s "My Heart Will Go On" and Whitney Houston’s "I Will Always Love You." She even brought girlfriend, Alyssa Quijano, onstage for a duet of Toni Braxton’s "How Could An Angel Break My Heart." Charice also promoted her upcoming concert with Aiza Seguerra titled The Power of Two, which will take place on September 28 at the Araneta Coliseum.

The next segment brought known online sensations to the stage performing their signature songs namely JAMICH, Kimpoy Feliciano, and Zendee Rose Tenerefe. The first POST feature went to the Colon Sisters (Norvie, Norie, and Nona) who flew in from Davao to give their rendition of Psy’s "Gangnam Style."

This search for the next POST calls for viewers to tag The Mega and The Songwriter’s social media accounts with their own recommendations and discoveries for this particular part of the show.

The iRequest segment was next and the Megastar performed Adele's "Someone Like You," which was requested by her daughters and her husband Kiko Pangilinan. Those who want to send song requests can tweet @megasongwriter using the hashtag #irequest.

Ogie’s segment, Ask the Songwriter, calls for viewers to send their stories via email (themegaandthesongwriter@gmail.com) for a chance to become the next inspiration for Ogie’s song. The Songwriter then performed a song he composed for his child.

The Greatest Hits segment showcased Abra promoting his most popular hits online. Reminiscing performances from the vocalists of some of the greatest OPM bands included Luke Mijares of South Border, True Faith’s Medwin Marfil, and Freestyle’s Top Suzara and Jinky Vidal. Luke promoted his latest album, Kasayaw, which is a tribute to OPM disco songs while Top and Jinky also gave samples from their own recently launched album titled Reunited.

Part 2 of the "Playlist" had Sharon and Ogie singing each other’s songs. Viewers were able to hear "To Love Again" and "Kahit Maputi na Ang Buhok Ko" by Sharon and "Bakit Ngayon Ka Lang" by Ogie. They proclaimed their mutual admiration for each other’s talents before ending the show with the opening song, "Nasa 'Yo Na Ang Lahat" mashed up with Ogie’s "Dito Sa Puso Ko."

The show felt just a tad too long with their numerous guests and features packed into one episode but it was probably because they wanted to establish the show as the next TV showcase for OPM artists.

Overall, The Mega and The Songwriter can be something to look forward to every Sunday night at 9 pm for an easy and entertaining music night with plenty of online audience participation.

Who knows? The next Philippine Online Sensation on TV they discover just might be the next international music star. 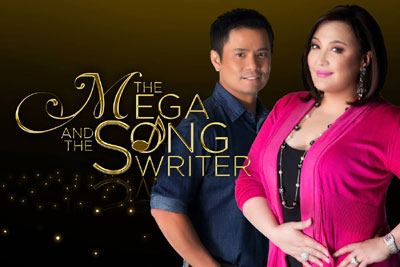