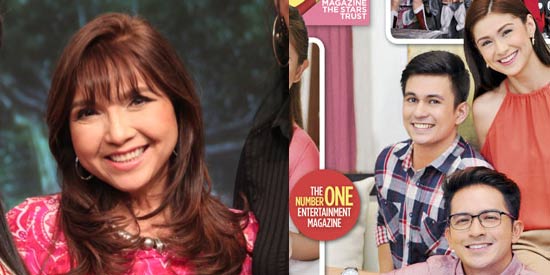 Chanda Romero (left frame) reveals what she will miss most about her My Husband's Lover co-stars Dennis Trillo, Tom Rodriguez, and Carla Abellana. The October 2013 issue of YES! magazine is now available in newsstands, bookstores, convenience stores, and supermarkets nationwide.

In the story, Eric rekindles his high school romance with Vincent (Tom Rodriguez), who is married to Lally (Carla Abellana). The three protagonists form an unusual love triangle.

Chanda does such a great job playing a sympathetic yet realistic mother of a gay son that she is now called the “Pambansang Ina ng mga Beki”—a title that she loves to bits.

She explains in detail what makes her character special:

“I've always loved gays! They bring so much color to my world. So when this role was given to me, I was excited...not only because it's different from my usual kontrabida roles but because Mama Sol was to be the wisdom and the conscience of my gay son, Eric and of the story for that matter.

“But I never expected Mama Sol would turn out to be such a character so loved by everyone especially gays. Gays wished I was their mother. Everywhere I went...gays from all walks of life would react so warmly to me. Some get kilig and jump up and down in excitement. Some want me to adopt them. Hahahahaha!

“Almost every face I see lights up when they see me and ask me: 'Kumusta si Eric?' like they were part of a real family.

“MHL made me realize how most viewers still can't draw the line between the character and the actor. The viewers love Mama Sol because she is such a loving mother. So compassionate and nurturing... and so I have make a conscious effort to always keep a smile on my face.

“The warmth and the love of MHL fans is [are] so heartwarming and inspiring.”

But don’t ask Chanda what she considers her character’s biggest moment because she can’t choose just one scene.

“It may sound cliché but almost all my scenes are big,” she explains. “No scene in MHL is insignificant. Thanks to the wonderful work of head writer Suzette Doctolero and her pool of writers.”

Suzette is also the soap’s creator. She narrates in the October issue of YES! Magazine that the MHL concept came to her while attending a drama summit organized by GMA-7 sometime in September 2012.

Chanda elaborates on why she considers almost all her scenes big:

“My character is so well-defined. My long lines are beautifully written. Although they were a challenge to my memory, I was always excited to deliver them...to impart pearls of wisdom without being preachy...and with love and affection.

“MHL fans tell me that one of the things they wait for are Mama Sol's lines and some even take it a step farther. They try to memorize my lines.”

However, she has several favorite scenes. She cites as an example the part where she warns her son from getting involved with a married man.

Chanda recites her lines from the heart:

Then she exclaims, “I loved these lines so much that even if we shot this scene on the first week of June, I still remember them...word for word.”

Needless to say, the well-regarded and versatile actress is passionate about her work and the people she works with.

She has been in showbiz for nearly four decades, and her diverse movie and TV projects include the cinematic gems Aguila (by Eddie Romero, National Artist for Film and Broadcast Arts) and Batch ’81 (by the revered Mike de Leon).

“Every taping day is exciting because of Direk Dom's varied and fresh approach to the scenes,” she points out. “He has so many inputs that add facets that enrich my character.”

She describes Dennis as a “fine, talented actor.” She adds with obvious fondness: “And what a pleasantly nice person to be around. No drama. No airs. Always humble and respectful. And professional. A rare breed.”

Now that MHL is ending its successful four-month run, Chanda can’t help but enumerate the things that she will miss about the show.

“I will miss the nights of waiting for my script to arrive...knowing I'm in for a good read again,” she begins.

“I will miss the excitement of reporting to the set...eagerly anticipating Direk Dom's ever new execution of the scenes.

“I will miss wearing Dom's unique shades...a new one every week...then putting them on for a pic...with Dom beside me.

“I will miss Dom's humor and wit.

“I will miss my roommates, Dennis and sometimes Tom. They both have such light disposition, it rubs off on you. But I don't think they'll miss me kasi ako yung maingay...just being happy and gay with my stylist, Ces and my makeup artist, Rhonel and all my gay "anaks."

“I will miss the loving care of our EP [executive producer], Ms. Carol Galve and AP [associate producer], Ms. Acris Tobias and their team. They take care of me like family. They both set the stress free working condition.

“I will miss my "Fave Four": my lighting director, Roman...my cameramen, Eric and Felix and TD, Mar...who make me look good always.”

Chanda concludes, “I will miss watching every episode of MHL...the artistic satisfaction I get whenever I see the rewards of each challenging working day and the SHEER pride of being part of this phenomenon that is...My Husband's Lover.”