"Super Inggo 1.5" paves the way for Book 2 of the superserye 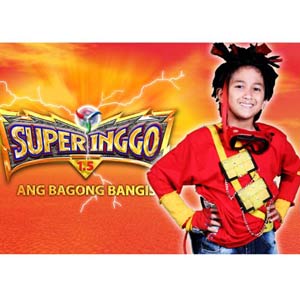 As a way of linking the first installment of this superserye to Book 2, ABS-CBN brings back the kid superhero and his super tropa in Super Inggo 1.5: Ang Bagong Bangis. This much-awaited sequel premieres tonight, November 3, on the Kapamilya Network.

Super Inggo 1.5: Ang Bagong Bangis boasts new characters and the use of animation, a new feature for this TV series directed by "Manong" Gilbert Perez. It will run for six weeks every Saturday, replacing Pedro Penduko at ang mga Engkantao.

In Super Inggo 1.5: Ang Bagong Bangis, Budong/Super Inggo continues his exciting journey as the ultimate Pinoy kid superhero. Can the power of his pure, kind heart overpower his haunting past? Will this be enough for him to save his family and friends from the Prince of Darkness and his legions?

What is the measure of a true superhero? This is the question that our young protagonist will try to answer in Super Inggo 1.5. Budong and his family have now transferred to the town of San Roque after fleeing their old town Sto. Niño, which was attacked by giant monsters. He will meet Lola Facunda, the mother of Pacita; as well as new friends such as Bokya, the talking cellphone; and Chin-Chin Tsinelas, Budong's crush.

"Super Inggo 1.5 will surely entertain the fans of the show," says production manager Raymund Dizon. "Televiewers will be delighted to see how the characters of the show will battle each other. Ang bangis talaga kaya sigurado ako, mage-enjoy ang mga manonood. Blentungan na uli."

With the comeback of the young Pinoy superhero on television, kids are invited to join Super Inggo in his quest to fight evil by joining the Power Force. This exclusive club consists of young citizens who will uphold the good values and advocacies espoused by their leader. The official Super Inggo fans club is open to kids aged 4 and up.