Sharon Cuneta on her TV5 series: "I haven't loved a show this much." 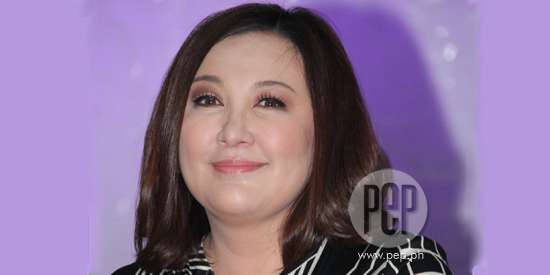 Getting Sharon Cuneta to do a teleserye is next to impossible, but she said yes to Madam Chairman for three reasons.

First, the Megastar is overwhelmed with the support of TV5’s big bosses to her first ever teleserye, which will premiere on October 14.

After years of doing mostly music variety shows on TV, Sharon shared that it was Wilma who urged her to try something new this time around.

“I’m very happy to be part of TV5 now. I have not been this happy since I signed up.

Second, Sharon fell in love with the concept of playing a street smart but kindhearted barangay chairman.

Not only is it very timely, but tackling current events makes story development easier.

“You can be socially relevant without shoving it down your audiences' throats. You can be funny and entertaining, but not be walang kwenta.”

"Ngayon lang ako nagkaroon ng role na ganito. Never in my 35 years in the business. I'm very happy that I did it here in TV5."

Playing the role of a public servant is also close to Sharon’s heart since politics runs in her family—being the daughter of the late Pablo Cuneta [Pasay City Mayor], niece of Senator Tito Sotto and wife to former Senator Francis Pangilinan.

Sharon, for her part, feels that being part of showbiz is much like that of politics in terms of her exposure to people from all walks of life.

This made it easier for the Megastar to internalize her title role as Madam Chairman or simply Bebeth.

“So, parang lahat ‘yan will come into the picture.”

Lastly, the Megastar agreed to do a daily show because of acclaimed director Joel Lamangan, whom she worked with in the movies Magkapatid (2003) and Mano Po 6: A Mother’s Love (2009).

“Even Direk Joel is perfect as our director kasi meron siyang strong sense of social responsibility. Wala siyang balak tumakbo pero tumutulong siya. In that way we're kind of the same. Like mother, like daughter.”

That they both work well together is a given. The bonus, according to Sharon, is that they have the same twelve midnight cut off in terms of working hours.

Having worked with various directors through the years, the singer-actress observed that Direk Joel is the type who works fast and still comes up with quality material.

“And I really appreciate each one of them cast and staff, especially Direk Joel.”

The soap hasn’t even started yet Sharon is already hoping that Madam Chairman gets extended.


"I have to tell this from the bottom of my heart, as God is my witness: I haven’t loved a show this much.

“I’m a singer. I love all my music variety shows in the past. Siguro, kasi it’s the first time na tawa lang ako ng tawa, tapos nagpapatawa, tapos may puso.

“I get along with the whole cast, the crew, the staff. I love working in an efficient environment.

“But most of all, I love working in a happy environment And that’s what I come home to three times a week in Madam Chairman.”