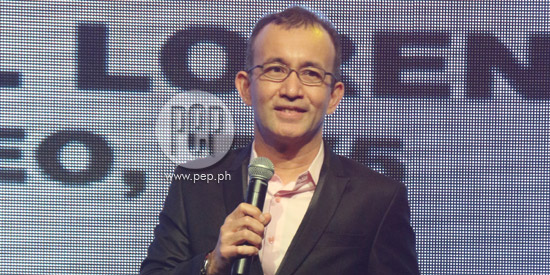 “We wanna provide counter programming with the useful shows that people see. In fact, that’s the first thing we wanna do, we wanna be different, we wanna show programs that actually allow people a choice,” says TV5 President Noel Lorenzana about the Kapatid network's programs that will premiere on October 14 as part of its “Everyday All The Way” primetime block.

With “Everyday All Way” as its tagline, TV5’s primetime block will offer new entertainment and public affairs programs from Monday to Friday, morning to evening, starting October 14.

Mr. Lorenzana believed the new shows will be as successful as their weekend programs, which were introduced few weeks earlier with the tagline “Weekend Do It Better.”

“We wanna provide counter programming with the useful shows that people see.

“In fact, that’s the first thing we wanna do, we wanna be different, we wanna show programs that actually allow people a choice,” said the TV5 President.

“Targeting them, at the same time, does not alienate the standard or the usual viewers.

NEW DAILY SHOWS. On Monday, October 14, TV5 will start the week by launching new segments of Good Morning Club, which will provide essential information to the public in a “bite-size” structure.

Meanwhile, Gelli de Belen and Christine Bersola-Babao team up for the first time in Face the People, where they will assist their guests in settling personal issues with the help of the audience. This airs every weekday afternoon from 4:30pm to 5:30pm.

On the other hand, TV5’s primetime block will now start with the newest barangay-serye on television, Madam Chairman, topbilled Megastar Sharon Cuneta herself and marking her first time ever to star in a teleserye.

During the launch, it was announced that Ogie Alcasid’s inspiring drama series The Gift, would be aired right after Madam Chairman. However, on October 8, it was announced that the airing of The Gift is postponed. Here is the official statement of the Kapatid network: "TV5 had to re-program primetime due to the entry of PBA Finals this Sunday, October 13. We chose to save The Gift for future airing and still keep a balance of offering of drama, interactive game, and sports on primetime."

The third primetime slot gives viewers a break from drama series. For the first time, actor Aga Muhlach will host a game show via Let’s Ask Pilipinas, which is a local franchise of the U.S. hit Let’s Ask America.

Let’s Ask Pilipinas takes advantage of modern Internet technology as contestants get to play in the comforts of their home. By participating through video calls on their computers, tablets or mobile phones, they get a chance to win P500,000. Let’s Ask Pilipinas airs at 8:00 p.m.

WEEKLY DRAMA. With “Everyday All the Way,” TV5 will also introduce a weekly drama series, which is a first in Philippine television.

Starting October 17, Thursdays take on a new meaning as TV5 offers a back-to-back airing of two weekly one-hour primetime series of Positive and For Love or Money, which will be aired at 8:30 pm and 9:30 pm, respectively.

Positive bravely tackles the issue of the rising HIV cases in the country. The drama series will be topbilled by Martin Escudero, a call center agent who, after being tested positive for HIV, goes on a life-changing journey through his past to trace the person who got him infected.

For Love or Money, on the other hand, brings back one of TV5’s prime actors Derek Ramsay on television as he stars with TV5 drama princess Ritz Azul and Alice Dixson in a captivating story of love and sacrifice. In this series, the character of Alice offers Derek P5 million in exchange for ten days of "companionship."

NEWS AND PUBLIC AFFAIRS. In his speech during the trade launch, TV5 President Noel Lorenzana mentioned the fusion of news and pop culture in their news and public affairs shows.

“We believe that there will be a merger of news content and pop culture.

“Today, my friend in news will actually show you how we will push news in a way that not only get the news there but also in a way that creates pop culture,” said Mr. Lorenzana.

In line with these, NEWS5, TV5’s news and public affairs arm, strengthens its commitment to be the credible source of information by introducing the KBO Block of Knowledge, Information and Opinion, where viewers can now look forward to various informative and educational shows every night starting at 10:30 p.m.

Cheryl Cosim will be scrutinizing and discussing the stories and facts behind relevant statistics in Numero, which airs every Tuesday.

Every Wednesday, Lourd De Veyra gives his own brand of history lessons and trivia in History.

On Thursdays, Atty. Teresa Licaros will tackle the plights and concerns of Overseas Filipino Workers in Dayo.

Paolo Bediones returns every Friday on Astig to talk about the science behind sports.

To cap off the night, TV5 viewers will see Paolo Bediones, Cheri Mercado, and Jove Francisco deliver a comprehensive 25-minute news program in Pilipinas News at 10:50 p.m. It will be followed by Reaksyon at 11:15 p.m. featuring NEWS5 Head Luchi Cruz-Valdez and her touching interviews of different people.

Lastly, TV5 adds a new program on its weekend line up featuring a social experiment involving “half-local but full-global” Fil-Brits in Juan Direction.

Through this new lineup, TV5 hopes to offer viewers "a complete menu of program to satisfy every viewer’s cravings for tasteful entertainment programming and relevant news and public affairs information all week long."