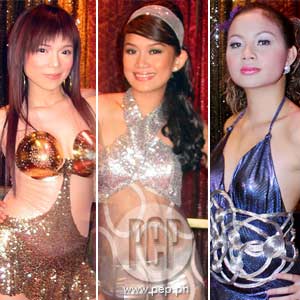 (L-R) Celebrity singers Nina, Tuesday Vargas, and Sitti exchange their microphones for dancing shoes in the November 11 episode of Shall We Dance. It airs this Sunday, 9 p.m., on ABC-5.


Various music genres will be represented in the upcoming episode of Shall We Dance: The Celebrity Dance Challenge hosted by dance goddess Lucy Torres-Gomez this Sunday (9 p.m.) on ABC-5.

During the all-male celebrity finals last Sunday, November 4, Paolo Ballesteros and partner Donna Bidua ruled the dance floor as they defeated Uma Khouny and partner Victoria Huyatid, and Mikee Lee and partner Raine Trinidad. This time, ABC-5's reality dance show gives viewers another reason to watch this Sunday as three of the most popular singers in the country today battle it out on the dance floor to become the next ballroom diva.

Bossa nova princess Sitti, soul siren Nina and novelty singer Tuesday Vargas are pitted against each other for an all-out catfight on the dance floor. Sitti, who is paired with dance instructor Mike Flores, will dance a salsa-inspired freestyle. Nina and her partner Efren Ibo will do a swing-inspired freestyle dance while Tuesday and partner Greg Dimarucut will groove to a jive-inspired freestyle routine.

Nina, unknown to many, had already wished joining the celebrity dance competition from the time she was first invited to sing in the show. When SWD asked her to be part of the singers' batch, she didn't think twice.

Nina used to take ballet and jazz dance lessons when she was very young. It's no wonder she did not hesitate to take up the celebrity dance challenge.

Like Nina, Sitti also became a guest singer in SWD. She was so impressed by the celebrities' dancing ballroom on the show that she actually considered the possibility of competing in SWD someday. And now, she's ready to show off her dancing prowess for the first time on TV. According to Sitti, it will be a real challenge for her since she has no background in dancing, much less ballroom style.

If Nina and Sitti are first-timers in ballroom, Tuesday is a second timer on SWD. She already competed in Season 3, pitted against Emilio Garcia, Andrea del Rosario, and Jeric Raval. She made it all the way to the finals but fell short of getting the trophy away from Roderick Paulate, who was Season 3's grand champion.

Will Tuesday, finally grab the top spot this Sunday or will Nina and Sitti surprise us all with their untapped dancing skills? Well, place your bets now and be sure to catch Lucy Torres's celebrity dance competition this Sunday, only on ABC-5.