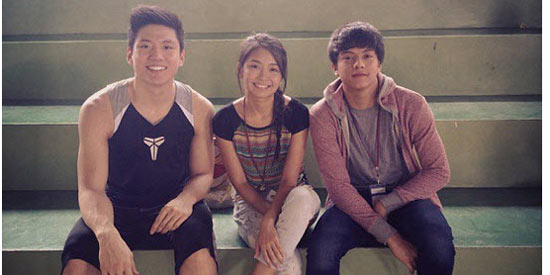 In his Twitter and Instagram accounts, Jeron Teng (left) shared this photo of him with Kathryn Bernardo (middle) and Daniel Padilla (right). The basketball player recently appeared in the KathNiel teleserye, Got To Believe.

For his acting debut, Jeron Teng does what he knows best: play basketball.

The De La Salle basketball star plays a cameo role as a campus heartthrob in the October 23 episode of ABS-CBN's primetime teleserye, Got to Believe.

In the first part of the episode, Chichay (Kathryn Bernardo) brings Joaquin (Daniel Padilla) to their school gym to watch a basketball game.


When the game ends, the campus heartthrob is seen huddling with his teammates as they shout, "One big fight!"


Incidentally, this is the signature cheer of the Ateneo de Manila Blue Eagles, the arch enemy of Jeron's school, La Salle.


As Jeron's character walks out, he is approached by adoring fans who ask if they can have their photos taken with him.

This is exactly what is now happening to Jeron in real life: endless requests for photos with him.


"Picture? Tara, picture tayo," he tells the two girls, which is also exactly how he deals with the requests in real life.


In the 76th season of the Universities Athletic Association of the Philippines (UAAP), Jeron was named MVP or Most Valuable Player.


Jeron is the younger brother of Jeric, who was a shooting guard for the UST Growling Tigers in UAAP 76.


The Teng brothers are the sons of PBA legend Alvin Teng.


In the PEP.ph (Philippine Entertainment Portal) webshow, PEPtalk, Jeron and his brother Jeric admit that they have the same crush: Jessy Mendiola.

In PEPtalk, both brothers also say they have their eyes on the ball because their big dream is to play in the professional league. Showbiz, they say, is not in the picture in a big way.

Jeron does add that he can think of hosting shows on occasion, but acting may be a stretch for him.

Now it seems like the pressure and pleasure of trying "occasional" showbiz is already in the here and now—which is something the fans are likely to approve of.

(Watch the Teng brothers on PEPtalk)