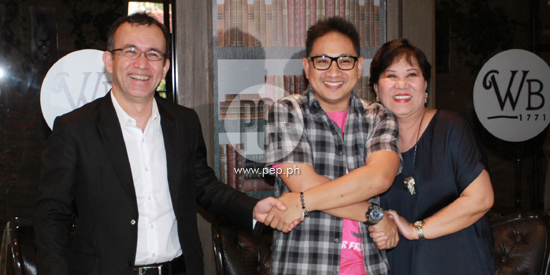 “I’m all for killing the network wars,” declared Michael V. during his contract signing with TV5 for the game show, Killer Karaoke Pinoy Naman.

In a press conference held this Friday, October 25, Michael said that he’s thrilled to return to the Kapatid Network where he first started his career as a comedian via the gag show, Tropang Trumpo.

He was quick to clarify though that he signed up with TV5 just for Killer Karaoke Pinoy Naman.

It is the Filipino franchise of Killer Karaoke, an American singing competition with a twist.

While the contestant performs a chosen song, various obstacles will unexpectedly arise to prevent him/her from finishing the song number.

NON-EXCLUSIVE CONTRACT. Michael is quite in demand these days as he is also busy with his regular shows on GMA Network, including Bubble Gang, Eat Bulaga, and Pepito Manaloto.

According to the talented comedian, the very reason he chose to be a non-exclusive artist is for him to have the freedom to do shows that he really believes in.

Never mind the fact that having a network contract would mean stability for his showbiz career.

Asked how he managed to keep on fielding projects after 23 years in the industry, Michael replied, “Unang-una magaling ang manager ko.”

After pondering some moments about it, he added, “Siguro dahil sa pangalan na naitaguyod mo—yung reputasyon.

CREATIVE GENIUS. During the press conference, Wilma, who used to be a senior vice-president for entertainment in GMA Network, attested to Michael’s undeniable talent, stressing his involvement in the conceptualization of most of his shows.

Michael humbly refused to be called a “creative genius,” however, stating that there are still a lot of things he has yet to achieve in terms of his craft.

“Sabi ng iba, do not rest on your laurels. That’s exactly what I’m trying to do.

“Kasi you have to be two steps ahead. Dapat three or four pa, everytime na may ginawa kang something na na nag-click at kinatuwaan ng mga tao.

As an artist, Michael shared that his inspiration comes from simple day-to-day occurrences.

Killer Karaoke Pinoy Naman will air its pilot episode on TV5 on November 16.