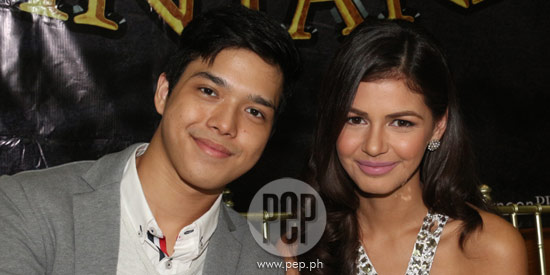 That was how Janine Gutierrez described her feeling about playing a lead role for the first time.

She will reprise the role of Lynette Quintana, played originally by Donna Cruz, in the remake of GMA Network ‘90s hit teleserye Villa Quintana.

The young Kapuso actress admitted that being in a family of actors is an added pressure for her.

Janine said she also always keeps in mind the advice of her parents.

NEW LOVETEAM. In Villa Quintana, Janine will be paired for the first time with young Kapuso heartthrob Elmo Magalona, who will portray the character of Isagani Samonte. It was previously played by Keempee de Leon.

Since this is a new partnership for Elmo, who was popularly paired with Julie Ann San Jose, Janine did not deny she has been getting all sorts of reaction from their fans.

However, the young actress is happy that the reactions she gets from Twitter are mostly positive.

“Nakakatuwa, I didn’t expect it.”

THE PLOT. As Isagani and Lynette, Elmo and Janine will retell a story that represents how sweet young love can be.

Isagani is the lovechild of Robert (Paolo Contis) and Lumeng (Sunshine Dizon) but will grow up knowing that his father is Felix (Raymart Santiago). He lives a simple life in the farm together with his parents. He eventually falls and fights for his love for Lynette.

Meanwhile, Lynette will be mistaken by Don Manolo (Roy Alvarez) as the child of Robert and Lumeng. Thus, she grows up living a comfortable and affluent life. She requites Isagani’s affection.

As the story unfolds, viewers are set to find out if their love for each other will prevail despite the conflict between their families. Everything changes when Lumeng discovers a secret of the Quintanas that overturns odds, a detail from the past that affects the fate of the young couple's love for each other.

The Villa Quintana remake will be directed by actress-director Gina Alajar.

It will premiere on November 4 on GMA Afternoon Prime.