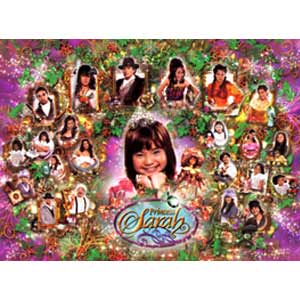 Princess Sarah promises to touch the lives of televiewers once again as ABS-CBN brings to life this moving story for kids aged "nine to ninety."


Filipinos loved the animated little princess named Sarah Crewe during the early '90s. It was such a big hit that in 1995 the animated series was adapted for the big screen, which starred young actress Camille Prats in her launching movie Sarah, Ang Munting Prinsesa.


After the movie version, the animated series was still being shown on television every now and then to delight children. Now, ABS-CBN will bring to life the little princess once again through their newest teleserye, Princess Sarah, which will start airing on Monday, November 12.


The plot revolves around a little girl named Sarah Crewe (Sharlene San Pedro) who lives in a boarding school for rich girls. But her father, Captain Christopher Crewe (Albert Martinez), has to leave Sarah to go on an expedition. An untoward incident happens, leading to rumors that the Captain has passed away, leaving Sarah a penniless orphan.

PLOT CHANGES. During the media junket last Thursday, November 8, the directors of the show—Don Cuaresma and Nuel Naval—revealed that they made some minor changes in the original plot of the A Little Princess, the children’s novel where Princess Sarah was based.


One of their revisions was to change the occupation of Sarah’s father. In the animated version, Captain Crewe is a miner, but in this teleserye he is a captain of a ship with his friends Mr. Brandon Crisford (Diether Ocampo) and Mr. Philip Burrow (Carlos Agassi).


Although they added some scenes, the directors said that they still followed the original story of Sarah so that it would still appeal to children.


Another very noticeable change in Princess Sarah is the gender of Ram Dass. This character was originally played by a man but in this teleserye, it will be played by the comedienne Ai-Ai delas Alas (as Ramadas).


When asked if they are not afraid that people might not easily accept these changes, Direk Don answered, “Oh, well, between a cartoon and Ai-Ai delas Alas, you would really watch Ai-Ai delas Alas.”

The directors also said that they wouldn’t mind if people would criticize what they changed in the story. Don explained, “As long as entertaining ang pagkakagawa at magiging glued ang mga televiewers, we don’t mind na masabi na parang dinagdagan namin. At dinagdagan naman namin ito for the good of the soap opera.”


The little princess will capture the hearts of kids of all ages starting Monday, November 12, after TV Patrol World on ABC-CBN.