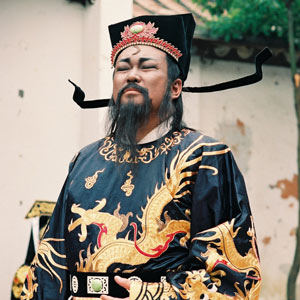 Bao Zheng (in photo) was highly esteemed for his strictness in upholding justice and opposing corruption no matter how powerful the culprit. The Mandarin period drama Judge Bao, which is based on anecdotes about his life, airs weeknights on ABC-5 after Sentro.


ABC-5's new Asianovela aims to stress the values of transparency and incorruptibility among government officials. Judge Bao, a Mandarin period drama that began airing last November 12 on ABC-5, tells the story of the legendary Bao Zheng (999-1062), who was a much-praised judge during the Song Dynasty. Because of his renowned fairness, he remains a powerful icon in Chinese popular culture to this day, especially for the disenfranchised who seek justice. He is often portrayed with a black face and a white crescent-shaped birthmark on his forehead, suggesting the impartiality and uprightness of an ancient Chinese official.


Bao was born into a cultured and scholarly family in Anhui, China. At the age of 29, he passed the highest level of the Imperial Exams and was qualified to serve as a magistrate in Kaifei, the capital city of the Song Dynasty.


He was well known and respected for his uncompromising principles against corruption especially among government officials. He never yielded to pressure, not even to the "royal" father-in-law. He also had conflicts with other powerful members of the Imperial Court, including Prime Minister Song Yang. He once had 30 high officials demoted or dismissed for corruption and bribery.


There are many legends and stories about Bao and his witty approach to solving mysteries and tough cases.


For the November 19 episode, Qin Xianglian came with her children to the capital city of Kaifeng to look for her husband Chen Shimei. They had been married for 10 years when Chen bid goodbye to his parents, wife and children before setting off to take the Imperial Examinations and, eventually, marrying royalty (the Emperor's daughter).


At the palace, Chen refused to see her and the children for fear that this would compromise his position and favorable future. The wife's pleas and the children's tears all failed to move his hardened heart. With all her hopes shattered, Xianglian confided her woes to Judge Bao.


Bao, famous for his impartial and incorruptible character, was filled with rage with the crimes of the emperor's son-in-law. He invited Chen over to his place for a meeting and after failing to persuade him to make amends, Bao had him arrested.


The news alarmed the emperor and his daughter, Chen's second wife. They offered Bao three hundred teals of silver to withdraw the case, but the morally upright judge bravely put Chen to death.