ABS-CBN leads in national TV ratings across urban and rural homes in 2013, based on Kantar Media data 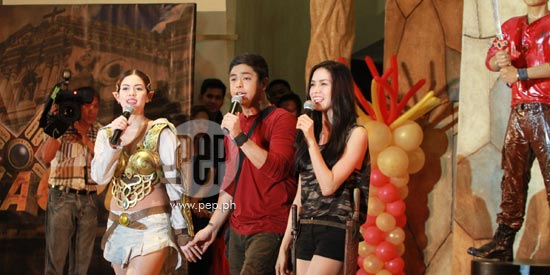 PRESS STATEMENT FROM ABS-CBN, published as is:


From sign on to sign off, ABS-CBN is the most watched network in the country in 2013 after it ruled national TV ratings across urban and rural homes with an average national audience share of 42%, or 9 points higher than GMA’s 33%, based on year round data from Kantar Media.

From January to December 2013, ABS-CBN beat all other networks across all time blocks and even swept all 15 slots in the list of top 15 most watched programs last year.

The Kapamilya network remained undefeated in primetime (6PM-12MN) with an average audience share of 47%, or a whopping 16-point lead over GMA’s 31%. The primetime block is the most important part of the day when most Filipinos watch TV and advertisers put a larger chunk of their investment in to reach more consumers effectively.

TV Patrol remained as the viewers’ top choice for newscasts with an average national TV rating of 27.7%, or a ten point lead against GMA’s 24 Oras (17.1%).

On December 2013 alone, ABS-CBN again ended the year with a bang by maintaining its monthly leadership over rival TV stations garnering an average audience share of 43%, or 10 points higher than GMA’s 33%.

Kantar Media is a leading television (TV) audience measurement provider with capabilities in gathering TV viewing data in both digital and analog platforms. It is a multinational market research group that specializes in audience measurement in more than 80 countries, has 26 TV networks, ad agencies, and pan-regional networks subscribing to its ratings services.

Among these, the following subscribe to both urban and rural TV audience measurement: ABS-CBN, Brand Ideas, MPG Havas, and 720ConsumerConnect.