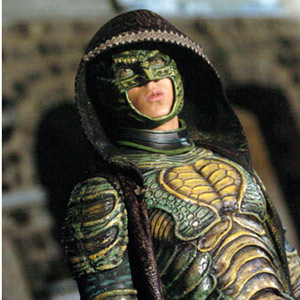 Plunging into a rigorous physical training program, Richard Gutierrez shuttles between the gym and Kamandag tapings.
After taking a two-month break, Richard Gutierrez, is busy once again shooting a new telefantasya under GMA-7. This time, Richard plays the lead role in a TV adaptation of a Carlo J. Caparas classic, Kamandag.

Richard talked with Philippine Entertainment Portal (PEP) last November 7 while taping at the St. Jerome Church in Morong, Rizal. The smiling actor said he never really took a break as he immediately went into training after Lupin to keep himself fit and ready for any new project.

"Nag-prepare talaga ako before pa dumating si Brandon [Vera, currently Richard's personal instructor]," said Richard as he sat before his gorgeous Apple laptop. "Nag-work out ako, a lot of cardio and a lot of discipline."

Richard's initiative paid off. Kamandag requires more physical skills than he used to do as an actor. The network brought in mixed martial arts fighter and Ultimate Fighting Championship (UFC) title contender, Brandon "The Truth" Vera, to personally train Richard for the fight scenes.

Despite having a good physique himself, Richard's reaction the first time he saw Brandon up close was no different from any ordinary person's.

Richard shared a bit about his physical regimen.

SYNOPSIS. Kamandag is based on the popular Carlo J. Caparas comic strip in People's Tonight in the early ‘80s. The powerhouse cast of this re-imagined version of the popular komiks is led by today's most sought-after actor Richard Gutierrez as Vergel/Kamandag. This newest primetime program tells the awe-inspiring journey of a superhero as he searches for love, family, self-identity, and purpose.

The story of Kamandag begins in a place called Ambograw, the world of the Ambog or half-human, half-beast creatures. This is where the gods and the goddesses of the animal kingdom dwell. Here, mortals belong to the lower class and are treated as slaves.

Ambograw is divided into five kingdoms: Hasbaya, the snake kingdom headed by the just, good-natured King Saban (Gardo Versoza) and his mortal wife Queen Alicia (Eula Valdes); Orobaya, where the bull creatures live with King Budog (Johnny Delgado) as their chief; Lobobaya, kingdom of fox-like creatures headed by King Gular (Zoren Legaspi); the kingdom of Goybaya where dwell ape-like beings, the most humorous and most business-minded creatures in Ambograw, headed by King Dingol (Benjie Paras); and the kingdom of Pusbaya, the turf of wildcats led by Queen Kuran (Francine Prieto), who is considered the most deceitful leader in Ambograw.

It is in Ambograw where Vergel (Richard Gutierrez) is born. He is the son of King Saban and Queen Alicia but despite his royal blood, Vergel is born as a mortal. Since mortals are deemed slaves of the Ambog, King Saban fights for his son's rights but he is killed by other gods. King Budog, the best friend of King Saban, sends Vergel to the mortal world in order to escape his fate as a slave.

Baby Vergel is left outside the house of Domeng (Emilio Garcia), a zoo custodian who adopts and loves the abandoned boy like his own son. However, Domeng's wife, Elena (Melissa Mendez) despises Vergel.

While growing up, Vergel discovers his snake powers. Whenever he is agitated, scales emerge from his skin, the color of his eyes change, he senses danger through his keen sense of smell and he emits deadly venom. Vergel uses his powers only for good purposes and because of his heroic acts, the townspeople finds a new superhero in him and call him Kamandag.

Like any ordinary guy, Vergel finds inspiration in love. He grows exceptionally close to Ditas (Ehra Madrigal), the daughter of Domeng and Elena; Jenny (Jewel Mische), a wealthy Manila girl; and Lily (Maxene Magalona), his childhood best friend. Who among the three ladies will end up with the superhero?

But what if Vergel finds out that his pal Lucero (Mark Anthony Fernandez) is also interested in the lady he loves? Will he give up his love for the sake of friendship? And what if Vergel finds out that Lucero, who has the same powers like him but uses it for evil, is the culprit in countering the heroic acts of Kamandag? And will Vergel finally be able to return his own kingdom and continue what his father King Saban fought for—justice and equality among beasts, mortals and half-breeds?

Aside from the breath-taking story, Kamandag is also highly impressive for its action-packed sequences. Expect the display of mixed martial arts in the fighting scenes of Richard, who was specially trained by no less than Filipino-American international Ultimate Fighting Champion (UFC) superstar Brandon "The Truth" Vera.

With renowned directors Mark Reyes and Topel Lee, Kamandag boasts a world-class production, from the awe-inspiring story to the state-of-the-art props, costumes, and set design, as well as stunning visual effects by Larger Than Life. Feel the excitement in Kamandag with its theme song titled "Kamandag," performed by First Circle.