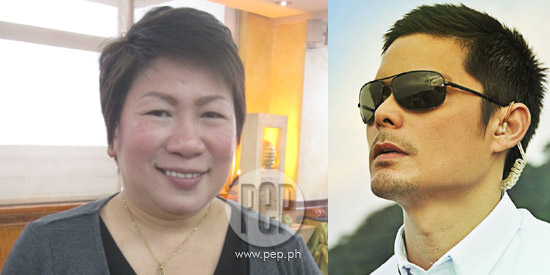 Lilybeth Rasonable (left), GMA-7's Senior Vice President for its Entertainment Group, says about the Dingdong Dantes-starrer Genesis, "Pinakita dun how good Dingdong was as an actor."

Select members of the media had the chance to meet with GMA Network executives to discuss the new offerings of the Kapuso Network this 2014.

PEP.ph (Philippine Entertainment Portal) took this opportunity to ask the GMA executives to assess the Kapuso Network's performance in the ratings game in 2013, Rasonable candidly admitted, "If you look at the whole year, there are hits and misses—whether you're GMA or another network.

"It was all very challenging. Siyempre, competition 'yan, e.

"What is sure is that we put up a good fight. We had many successful TV shows on primetime like Mundo Mo'y Akin, Anna Karenina, and, of course, siguro ang pinaka-successful, ang My Husband's Lover. Ang most important for us is to drive home the point that GMA Drama always comes up with a groundbreaking series, every so often. It pushes the envelope further and it changed the landscape.

When Genesis and Akin Pa Rin ang Bukas ended on December 27, they were replaced by Kapuso Primetime Cinema, which showed foreign movies dubbed by Kapuso artists.

There have been negative comments regarding the decision of GMA to air Tagalized movies in the primetime block. What is the reaction of GMA executives to these criticisms?

"It's a programming decision that we arrived at the end of the year. We wanted to have time to mount these new offerings that we have in January.

"Of course, we cannot please everybody. May mga fans ng Telebabad na hinanap ang mga shows kaya lang on the other side of the coin, nag-create ito ng anticipation.


Veteran writer Mario Bautista commented that it wasn't a good programming move for GMA to air movies in the primetime block.

In response, Rasonable said, "Unang-una, yung sinasabi mong wrong programming move, actually ratings-wise, the movies are doing well in setting the base for the entry of Carmela and Rhodora X.

"Genesis was really a short run soap, to begin with, kasi may time bomb na nagti-tick, e. It was really uncanny kasi noong nag-pilot kami with an earthquake then biglang nag-earthquake.

"Tapos noong tsunami namin [sa teleserye] then biglang pumasok si Yolanda. It was really uncanny. We tempered it after that.

"It was an old concept that we thought we would take a risk on because it was a disaster soap, it was an apocalyptic soap. It was a risk. We bravely took that risk.

"It did not do bad naman. If anything, pinakita dun how good Dingdong was as an actor.

"We just build on that and learn from whatever risk you took."

Rasonable pointed out that they deliberately chose to end the two shows—Genesis and Akin Pa Rin ang Bukas—during the holiday season.

In a separate interview, Rasonable admitted that they were prepared for the consequences of taking on risks in programming.

Did they feel threatened by the strong performance of Honesto in the ratings game?

"When you take risks, you have to be ready for whatever the outcome will be. We are not disappointed because our artists, especially Dingdong, Rhian, Lorna Tolentino, they did a wonderful job.

"LT made a wonderful Madam President. They all did their best and we are happy with their performances.

"We are not disappointed at all because we were given the chance to do that project na na-appreciate namin sa management kasi binibigyan kami ng ganung kalaking tiwala.

[Tinatanong kami], 'Do you want to do that? Okay, we'll support you there.'

"For us in creatives, that's something that is valuable to us. We are not put into a straight jacket that we only have to do this or the same stories all over again.

"In fact, we are encouraged that's why Genesis was approved to begin with. We're not disappointed at all."