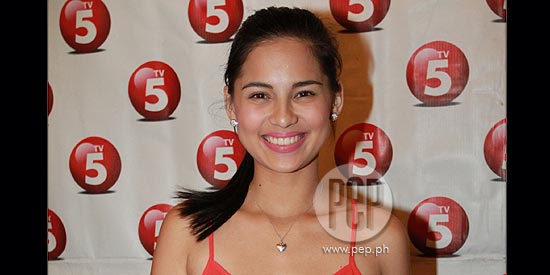 For the TV5 series Jasmine, Jasmine Curtis Smith will portray a fictional character of herself on television.

“It’s called Jasmine and it is about a life of an actress,” says Jasmine Curtis Smith when asked about her newest project with TV5.

In an interview with PEP.ph (Philippine Entertainment Portal) in Cerchio, Quezon City last January 27, she shared her excitement in starring again in her own TV show. She previously topbilled the Kapatid Network's 2011 series Ang Utol Kong Hoodlum and she was part of the 2012 series Nandito Ako, which also starred David Archuleta.

JASMINE. For the first time, Jasmine will portray a fictional character of herself on TV.

Jasmine will revolve around an actress who will have a conflict with a stalker called "Maskara." At first, Maskara creeps her out with long, online love letters, online shrines, and gifts sent to her location shoots.

“She dismisses him as just another crazy fan until he saves her from a douchebag co-star who tries to get Jasmine into a sex video in order to blackmail her.

“Now Jasmine must find out who Maskara is.”

The actress explained, “It’s a mix of fiction and reality so basically the audience they really have to figure out what’s real and what’s not.

“But, of course it’s a peg of Entourage where the characters are playing their own names but of course their personalities are a bit more made up and fiction because also we have to portray a story line.”

How is Jasmine different from previous TV shows that she has done in the past?

She pointed out, “It’s not that different it’s still your typical drama series and it still contains the twists and turns that everyone waits for. But I guess now that TV5 is introducing a new interactive social media application, yun it’s more interactive for the viewers.

“It will challenge them on how they expect TV series to be because of mga nakasanayan ng TV drama na sobrang OA [overacting] sa story line or hindi maka-relate now naman they get to see something a bit more out of the ordinary and something that they always do in Hollywood but we never attempted to pursue and execute here.”

Jasmine has truly been blessed with projects from her home network. Her current TV show Spin Nation ended last January 25 but it is scheduled to begin its second season on February 1.

Jasmine talked about her current projects, “Spin Nation, the show that I host, just ended last Saturday [January 25] and now we’re starting Season 2 this Saturday agad-agad. I think it’s still at 10:30 or 11 pm. It’s an hour-long show on social media and music.

“Other than that I’ll be shooting Dementia, my new movie with Ms. Nora Aunor. Of course, Replacement Bride which is a movie made for TV by Studio 5 which will be airing on February 18.”

FOCUSING ON WORK. Because of her busy work schedule, Jasmine decided to take a leave in school to focus on her work.

The actress explained, “For this semester, I didn’t enrol because of the fact that I lack time for work and it was not good enough to just get the grade. Kailangan, I would get the grade but be excellent at it and at the same time for work I couldn’t be just suffice with, ‘Okay gagawa ako project.’

“It has to be like my full attention in one thing because I don’t settle for average and mediocre and I’m sure that goes for everyone out there that has tried to do both at the same time.

“So that was a decision that was discussed for a long time.”

WORKING WITH THE SUPERSTAR. After the success of her movie Transit in 2013, Jasmine will be seen as the niece of Nora Aunor's character in Dementia. This is a horror-suspense drama directed by Perci Intalan.


Jasmine described Superstar Nora Aunor as very quiet and reserved, “We will be shooting pa lang in March in Batanes.

“So I’ve only spoken to her a few times when we shot the teaser. She’s very quiet and very reserved so I was very shy and very afraid to talk to her also. Of course, she’s a legend so where do you start a conversation with her?”

What was her reaction when she knew that she would be working with Nora Aunor?

“I was scared, of course, you know people would compare you against her and you know will try to see if kaya ko bang makisapagsabayan kay Ms. Nora Aunor?

“But more than anything it is also a good way to pick up more tips from a legendary actress because I was able to do that from Ms. Irma [Adlawan] in Transit. You know, I guess it was a natural connection and growth when I was exposed to Ms. Irma so I think and I hope that will also happen with me and Ms. Nora.”

Is she pressured to top her performance in Transit?

“It’s scarier because of the fact that our films are also so tightly compared last year in terms of who’s gonna represent the country in the Oscars.

“But you know you have to learn how to ignore that and just do your best at work otherwise you wouldn’t be able to give your best or even half of it.

“Kasi masyado ka maapektuhan sa mga sinasabi ng iba. So despite that pressure I think it’s more of just I should be able to do this without thinking of that, or put your own pressure on yourself.

“Don’t let others dictate where you’re gonna go with your career or with your atake sa gagawin mo.”

Jasmine truly has a very supportive family especially her mom and her older sister Anne Curtis. What was their reaction when they knew that she will be working with a legendary actress?

“But she’s very very proud that I am working with someone who is the direct rival of her idol kasi siyempre it means na talagang umaakyat where I am going.

“But my Ate was ecstatic. She was over the moon to hear about it, she was very, very proud and supportive, of course, of everything that I do naman.

“And she’s one of the first few people who finds out even before I do kasi manager ko and her go way back.

“Sam was very happy and supportive like he’s very happy that I always have work and its with great people and people who I can learn from considering that I am still so young and I am still learning also the little tactics of this industry.”

With her busy schedule how does she manage time with her boyfriend Sam?

She expressed her happiness for the people who have continued showing their support for her. “People around us are actually very supportive, the people we work with, our management and our friends who are within the industry help us in terms of time management with each other but we see each other quite a lot.

“Work was never an issue when it comes to catching up lagi naman may text or pwede naman tumawag or mag-tweet so okay kami.

“We never miss out on anything.”

VALENTINE PLANS? When asked what Jasmine plans to do with Sam Concepcion on Valentine's Day, the actress replied, “Ewan ko sa kanya! Sana may plan siya bilang siya yung guy, but I’m not expecting anything.”