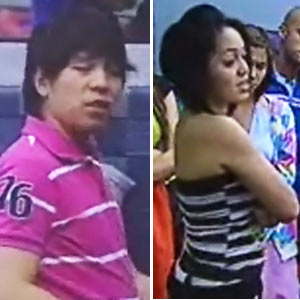 Mcoy Fundales (left) took offense at Big Brother's doubts about the originality of his script for Pamana, while Ethel Booba (right) is said to have concocted a "praning theory" regarding the real status of Mariel Rodriguez.


The rain didn't stop Mcoy Fundales and Ethel Booba from leaving Big Brother's house before dawn earlier today, November 22. It was a hasty decision for the two celebrity housemates after Mcoy engaged in a heated argument with Big Brother inside the confession room of the Pinoy Big Brother house.


For the weekly task called "Lights, Camera, Action," the housemates must all work together to make a short independent movie. It must be 10-15 minutes long and the scenes must all be shot inside the PBB house. The celebrity housemates will work on the pre-production and production, but Big Brother will be in charge of the post-production. They were supposed to submit their final draft by Thursday afternoon so Kuya could edit the movie in time for the premiere by the end of the week. The housemates chose to bet 75% of their budget.


Mcoy told his housemates about a murder story that takes place in Europe. A Filipino couple (Mariel and Victor) is set to visit their rich friend (Baron) who narrates the morbid history of his ancestral home. In a flashback scene, the viewers will see Baron's over-possessive grandfather (Jon) whose jealousy led him to poison his own wife (Riza) and a good friend (Will). Still, Baron's character insists that his villa is not haunted. Tentatively titled Pamana, the housemates rushed to shoot the indie film with Mcoy as the director and Mommy Yayo as the script supervisor and second-in-command.


However, on Tuesday night (November 20), Big Brother brought up the issue of plagiarism with the housemates. Apparently, he thinks that the script written by Mcoy is quite similar to the short story The Ghosts of August (1993) penned by Gabriel Garcia Márquez. The Musikerong Daddy explained that this particular story was discussed among them while brainstorming but he insisted that their group's concept was hardly the same.

A LOOK BACK. We recall that Mcoy's former band, Orange & Lemons, faced a scandal involving the alleged rip-off of their song "Pinoy Ako," which was the theme song of PBB Season One. It is said the melody of the band's hit song is based on the song titled "Chandelier" of the UK-based '80s duo The Care. This was a sensitive topic for Mcoy and could be the reason why he was very much affected by the plagiarism issue that Big Brother only wanted to clarify.


Even after a heart to heart talk with Big Brother, Mcoy stormed out of the confession room and announced to the housemates that he was quitting. Fuming mad, Mcoy removed his lapel mic and declared that he no longer wanted to wear it. The Musikerong Daddy pointed out that he found it hard to argue with someone whose face he could not even see.


Taking Mcoy's cue, Ethel Booba announced she was joining him. The Ultimate Pasaway housemate has issues of her own like the "praning theory" about whether Mariel Rodriguez was just a houseguest or a housemate who was also eligible for the big win, and a pending phone call for her boyfriend which she had requested two weeks earlier.


Mcoy and Ethel are the second and third celebrity housemates who opted for voluntary exit for this season. Unlike Gaby dela Merced who was welcomed to the outside world by her family and fans, only the staff, crew and security of PBBCE2 welcomed the musician and the comedienne outside the Big Brother house at 3 a.m. on this rainy Thursday.


Now that the Mcoy and Ethel are out of the game, how will the rest of the housemates inside the house face their weekly and daily tasks? Who will display leadership skills like Mcoy and who will make them laugh the way Ethel did? Yet another important question: would Big Brother take in new celebrity housemates to replace them?


For sure, Big Brother will reveal his plans at the right time, so tune in to Pinoy Big Brother Celebrity Edition 2, weeknights after Lastikman, and every afternoon for PBB Uber.