Nina, Sitti, and Tuesday Vargas to compete in the finals of "Shall We Dance" 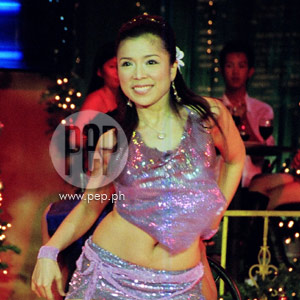 Soul siren Nina and her dance partner Efren Ibo (hidden) performed a freestyle jive inspired by Beyonce's hit song "Irreplaceable." Aside from Nina, Sitti and Tuesday Vargas are expected to compete in the finals of of Shall We Dance to be aired on December 2.


The second round of competition in ABC-5's Shall We Dance: The Celebrity Dance Challenge proved to be a tough one for singers Nina, Sitti and Tuesday Vargas as they pushed themselves to the limit to make a lasting impression.


To say that the dance battle last Sunday was a tight one is an understatement. But after the dance showdown, soul siren Nina still emerged on top. Sitti managed to grab the second place while Tuesday dropped to the last spot.

Tuesday and partner Greg Dimarucut started off strong during the first leg of the competition but they weren't able to surpass their previous performance last Sunday. It wasn't exactly disappointing but all the judges noticed a few lapses in their choreography. Probably they didn't practice enough to memorize their routines, but one thing's for sure, they need to come up with an extravagant routine in the finals to get back into the race.


Sitti, who didn't get many praises during the first round, came up with a powerful performance last Sunday. Sitti's and partner Mike Flores's very theatrical choreography of Selena's "Dreaming of You" caught Audie by surprise that made him react, "You know what, pang theater ang dating mo. Pag nag-cast ako ng West Side Story, may Maria na ako."


During the November 18 episode of SWD, Philippine Idol finalist Raymond Sajor was there to promote his World Vision concert this weekend. Host Lucy Torres-Gomez then announced that Nina, Sitti and Tuesday will all be in the finals on December 2. The pairs have at least two weeks to rehearse before the much-awaited championship round.

This Sunday, however, will be a recap episode and the start of the text-voting. So, be sure to watch Shall We Dance on Sunday, November 25, because Lucy will announce the voting mechanics. If you have a bet already, help her to win with your vote. One-fourth (25%) of the score will come from the text votes while the remaining 75% will come from the three judges' scores.


More surprises are lined up in this reality dance competition so don't miss Shall We Dance: The Celebrity Dance Challenge on ABC-5 every Sunday at 9 p.m.