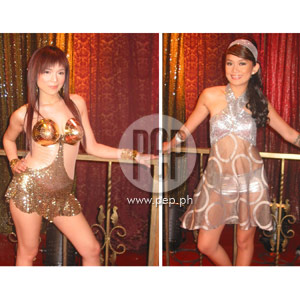 Nina (left) and Tuesday Vargas (right) will compete in the December 2 finals of Shall We Dance: The Celebrity Dance Challenge. Bossa nova singer Sitti has backed out due to an out-of-town gig.


Fans of bossa nova princess Sitti may not have been too happy about Lucy Torres-Gomez's big announcement last Sunday in Shall We Dance: The Celebrity Dance Challenge. The host declared that Sitti will no longer be competing in the December 2 finals.

Sitti backed out from the finals scheduled for telecast on December 2, Sunday, 9 p.m. due to a "prior commitment." The singer explained in the text-voting episode that she wanted to go all the way to the finals, having already invested so much time and effort in the competition, but she just couldn't cancel her out-of-town gig that had been scheduled way before she joined the contest.

Sitti had these parting words for her fellow finalists Nina and Tuesday Vargas: "Alam ko naman magaling kayo, magaling tayong lahat kaya i-enjoy ninyo na lang ang pagsasayaw sa Shall We Dance and good luck to the both of you."

With or without Sitti, the show must go on and it will indeed. This Sunday, December 2, the sultry diva faces the naughty singer in a ballroom battle royale. Who will be a hit on the dance floor and who will get a whip from the three resident judges—ballroom world champion Ednah Ledesma, theater director Audie Gemora and dancer/host Regine Tolentino?

In their stint in SWD, both Nina and Tuesday have proven their dancing talent, pushing themselves to the limit to meet the high standards of the judges. Like them, they believe that ballroom dancing is a serious sport, so it must be taken seriously.

Nina and partner Efren Ibo have already made a mark in the competition—they started off really strong and have managed to stay on top for two weeks. Tuesday and partner Greg Dimarucut, placed second in the first round of competition but they dropped to the last spot in the next round. The two were advised to get their act together if they hope to beat Nina and Efren in the last leg of the dance-off, especially since their scores in the eliminations will be carried over to their score in the finals.

In the finals, Nina and Tuesday will do two routines each, a dance of their choice and the rumba. The two singers will actually be dancing to the tune of their own songs that have been arranged ballroom-style.

Viewers should leave their next weekend open (December 8 and 9) since Shall We Dance has prepared something very special for all of their loyal followers. On these dates, Shall We Dance will have a two-part special that promises to be a really huge event.