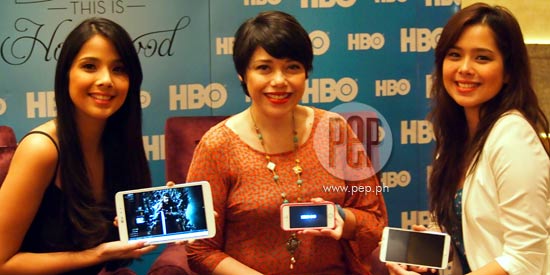 (L-R) Maxene Magalona, mom Pia and sister Saab are among the first to try the HBO GO streaming service. The Philippines is the second Asian country to enjoy the service after Hong Kong.

For a television-series addict, there seems to be nothing more annoying than having to stop your TV viewing for various unavoidable reasons, be it a call of duty or a mere call of nature. It’s too hard to let go, especially when you’re just minutes apart from reaching the plot twist.

“Available exclusively to Skycable in the Philippines, HBO GO is a versatile service enabling subscribers to maximize their HBO experience across multiple devices, whether at home or on the move. Subscribers of HBO GO can enjoy watching over 1,000 hours of quality HBO Original content 12-hours after U.S. telecast,” he added.

The Philippines is the second country in Asia to carry HBO GO, after Hong Kong. Celebrity family Pia, Maxene, and Saab Magalona were among the first to avail of this service.

Maxene said, “I’m so thrilled that HBO GO allows me to watch my favorite HBO shows like True Detective and The Newsroom on the go, from my phone, whether at the coffee shop or while on the set.”

But there’s actually more to this new broadband streaming service than its content and versatility.

For Certified ‘Series’ Junkies. HBO GO enables subscribers’ unlimited access to an extensive library of original movies, concerts, documentaries, and series, including complete seasons of all-time favorites like Sex and the City, Band of Brothers, The Pacific, The Sopranos, and Entourage, and thought-provoking titles such as Angels In America and John Adams. Special behind-the-scenes content of HBO Originals such as Boardwalk Empire, True Blood and Banshee is also available exclusively on HBO GO.

“This helps combat piracy and gives subscribers an opportunity to catch the newest episodes of their favorite HBO shows earlier,” explained Spink.

For those on-the-go. HBO GO allows content to be viewed from one device to another, plus “resume viewing” is also possible on your second device, from where you left off on your first device.

Parental Guidance. There’s a “Parental Control” feature that allows restrictions to be placed on accessing certain content. This is password protected and the password can be different from login.

This is a feature that celebrity mom Pia Magalona appreciates. She said, “The best thing about HBO GO for me is its password-protected parental control. It assures parents like me that it is safe to be watching HBO GO on tablets and phones that we share with our kids.”

Customized watchlist. One can create and customize a “Watchlist” that keeps track of bookmarked content for later viewing. For Saab Magalona, “I’m really looking forward to being the first to watch the new season of Game of Thrones uncut and immediately on HBO GO, within 12-hours of its premiere in the U.S.”

Speed. HBO GO adjusts to the speed of your broadband connection to ensure an optimum viewing experience. It works best though on a 1.9Mb/sec connection—the minimum being 500 Kb/sec for mobile devices and 1Mb/sec for all other devices.

Winner of the Best On-Demand Solution at IBC 2012 in Amsterdam and the Best Media Streaming Service for Mobile and Apps at the 2013 Webby Awards, the HBO GO service, according to SKYcable COO Ray Montinola, is free for SKYcable subscribers of the HBO PAK.

Meanwhile, subscribers of the basic HBO channel on SKYcable can subscribe to HBO GO for Php 199 a month while select SKYbroadband subscribers with SKYcable subscription of HBO can enjoy the service for free or at Php 99.

To get this new broadband streaming service, download the HBO GO App for free from App Store or Google Play Store or go to www.hbogoasia.com.