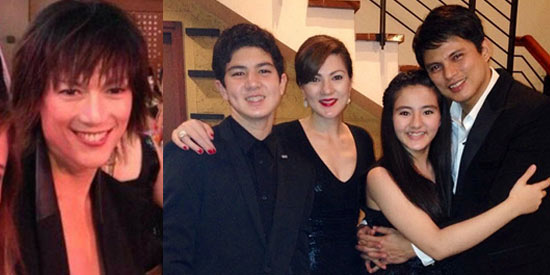 Ex-couple BB Gandanghari (left frame) and Carmina Villarroel chanced upon each other at the debut of Kathryn Bernardo, a moment Carmina describes as "awkward."

She and Rustom, who is now known as BB Gandanghari, were both at the debut of Kathryn Bernardo held last March 29 in Pasay City.

Carmina came with her current husband Zoren Legaspi and their twins Mavy and Cassy. The TV host-actress previously worked with Kathryn in ABS-CBN's now defunct primetime series Got to Believe.

BB is the uncle of Daniel Padilla, Kathryn's leading man in the show.

In the April 21 episode of Kris TV, Carmina said that Kathryn's debut was not the proper moment to socialize with BB.

Carmina recalled that she was seated at a table located near the table of the Padilla clan.

She pointed to the awkwardness of the situation as she had to do the introductions that night.

The actor outed himself when he joined the Pinoy Big Brother celebrity edition in 2006.

In an interview with BB Gandanghari last April 4, he also felt that the debut of Kathryn was not the right time for him to have a talk with his ex-wife.

"It's just that ayaw kong mapaglaruan at that time."

He added: "It's the first time na nagkikita sina BB and Carmina.

"So, I guess it should be best kung isang mas private na place or something."