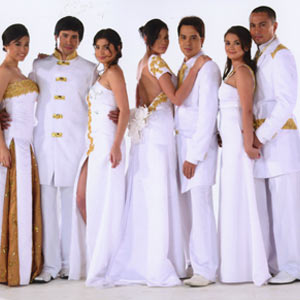 The riveting saga of the Madrigal and the Roxas families will continue to entertain and affect viewers as Maging Sino Ka Man returns to the boob tube with a bigger cast and surprising twists. New additions have been made to the show that has been honored during the 2007 PMPC Star Awards for Television as the Best Drama Series.

Book One, which ended last May, left followers of the show with more questions than answers. Jackie (Bea) and Eli (John Lloyd) are now married with the blessings of their respective parents, but will their wedded bliss continue? JB (Sam) and Celine (Anne) have vowed to not let go of the love they once lost. But is love enough to bond them together or will fate intervene?


What roles do the characters of Phillip Salvador and Rosanna Roces play in the lives of the four lead stars? What are the repercussions of their presence? What secrets are the new characters hiding?

CONTINUING SAGA. What will happen now to the Madrigal and the Roxas families?

We catch up with the lives of the four protagonists. Jackie Madrigal (Bea) and Eli Roxas (John Lloyd) are now married. Their wedded bliss will be tested in the next few months. JB Berenguel (Sam) and Celine Magsaysay (Anne) have vowed to themselves that they will not let go of the love they once lost.

Even more questions face each of the characters. How will Eli and Fidel Madrigal (Christopher) make use of the second chance in their lives? Will Corazon Berenguel (Chin-Chin) find a way to give her son JB another chance or will she make his life a living hell? What roles will Veron (Rosanna), Lena (Angelica), Joaquin (Derek), and Mateo (Phillip) play in the lives of the protagonists?