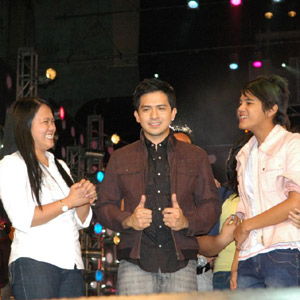 
The first-ever showdown of outstanding young Pinoys was a huge success with three aspiring music video directors hailed as winners in the 1st SOP Music Video Awards. The awarding ceremony was held at the University of the Philippines, Diliman, Quezon City, and aired on GMA-7 last November 18.


The team behind the music video "All Out of Love" led by Richard Librada, an 18-year-old student of PUP, bagged most the awards, including Best Videography, Best Concept/Story, Best Music Video, and Best Director. Dennis Trillo, who is part of Librada's team, won the Special Citation for Best Performance by An Artist for his remarkable performance in the music video.


This year, SOP Music Awards, through SOP Music Video Awards, has fulfilled its goal in discovering young aspiring music video directors from different university and colleges all over the country.

Marimar star Marian Rivera led the opening number while the Pinoy Pop Superstar winners belted out their songs as intermission numbers. StarStruck alumni Mark Herras, Marky Cielo, LJ Reyes, and Ryza Cenon performed an energetic dance number for the crowd composed mostly of university students and their supporters. The cast of Kamandag came in full force, wearing their elaborate costumes as a way of promoting the fantaserye involving mortals and half-animal creatures.


The special guest during the event was Movie and Television Review and Classification Board chairperson Consoliza Laguardia. In fact, during the portion called Sobrang OJ, the whole cast of SOP serenaded the MTRCB Chair and made light of her job as a censor.


The masterpieces of the SOP Music Video Awards finalists were judged by three of the country's renowned directors: Bb. Joyce Bernal, Rico Gutierrez, and Louie Ignacio. The Texter's Choice Award was based solely on the viewers' text votes.