Lucy Torres celebrates her birthday in "Shall We Dance" 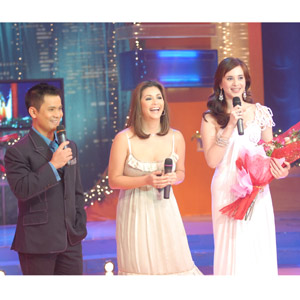 Ogie Alcasid (left) and Regine Velasquez (middle) greet the birthday girl Lucy Torres (right) during the taping of Shall We Dance: The Celebrity Dance Challenge's weekend special. This two-part celebration will be aired on December 8 and 9 on ABC-5.


There are three reasons why viewers should watch Shall We Dance: The Celebrity Dance Challenge's two-part weekend special on December 8 and 9 on ABC-5—it's pumped, loaded and star-studded.

One episode is definitely not enough because ABC-5's dance reality competition will be celebrating so many things all at once—Lucy Torres-Gomez's birthday bash, Shall We Dance second year anniversary, and its Christmas special.

Lucy's friends, lovebirds Ogie Alcasid and Regine Velasquez, wouldn't miss her birthday for anything. Aside from Ogie and Regine's duet, viewers can look forward to the various Christmas melodies to be performed by Christian Bautista. Watch the VTR greetings from Lucy's closest friends a s one of the the highlights in Lucy's birthday party. A special greeting will come from Gretchen Barretto who will deliver some good news for Lucy and viewers of SWD.

The birthday girl will also prove why she is dubbed as local television's dance goddess as she dances the tango with two of the best dance instructors in SWD, Paul Nuñez and Charlie Camacho, plus the Hotlegs.

Of course, Lucy's birthday bash would not be complete without her husband, Richard Gomez. Lucy and Richard will be presenting a special gypsy-inspired dance number together with their good friend Joey Marquez.

Another interesting highlight of the two-part special is the question-and-answer portion in which Lucy will take the hot seat while Richard and Joey interview her.

As part of the show's anniversary celebration, a special set of dance awards will be given out to former participants. Season Six Batch 2 winner Spencer Reyes and Batch 4 winner Paolo Ballesteros will slug it out on the dance floor as they do a showdown to find out who deserves to get the Dance Breakthrough Award. This is another must-see segment in the show as Spencer and Paolo will dress up as females while their respective partners will disguise themselves as males.

All these and a whole lot more are expected to happen in this rare two-part TV special of Shall We Dance. The December 8 and 9 episodes of SWD will air on ABC-5 at 9 p.m.