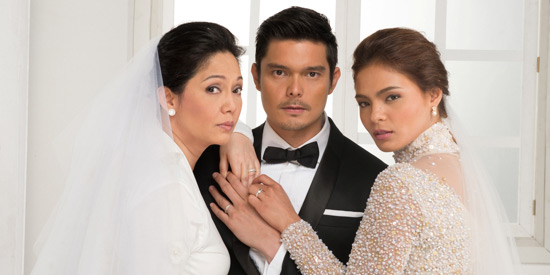 Ang Dalawang Mrs. Real is the newest primetime show on GMA-7 starring Dingdong Dantes, Lovi Poe, and Maricel Soriano. The story revolves around Dingdong, who plays Anthony Real, and the two women he falls in love with and marries.

Maricel is Millet Gonzales, an outstanding and highly-regarded educator who is successful in her career but not so in her personal life. She and Anthony accidentally meet and eventually, marry. The narrative glosses over their courtship stage and their married life 10 years later, which is presumably, present day.

The couple has a son named Tonton (played by Marc Justine Alvarez). Anthony has his own architectural firm and Millet is a stay-at-home mom. They are the picture of a happy family. The conflict comes from Millet’s father, Henry, played by Robert Arevalo. He resents that his unica hija has been sidetracked from a successful career by a man of whom he does not approve. Coney Reyes plays Sonia, Anthony’s overbearing mother, who takes it upon herself to defend her son from her rich in-law.

This storyline has been part and parcel of Philippine soap operas as it continues to reflect real life.

Cracks in the extended family’s relationship hardly affect the couple, however, who are still the picture of marital bliss.

However, a chance encounter with a stranger, Shiela Salazar (Lovi Poe’s character), reveals that Anthony has a weakness. It looks like Mr. Real is intrigued and enamored enough to pursue the young lady that catches his eye.

The characters are well-established. The actors are exemplary in each of their roles. Truly, the strong and moving acting is the series’ strength. Robert Arevalo as Millet’s father is overbearing, meddlesome, and just the right amount of condescending. He is still in perfect form as an actor. Coney Reyes as Anthony’s mother is equal parts despicable and relatable. Who can fault her for fighting for her son against his “matapobre” father-in-law? Jaime Fabregas (as Jun Real, the father of Anthony) and Celeste Legaspi (as Aurora Gonzales, the mother of Millet) breathe life into their roles beyond being caricatures.

Maricel Soriano tempers her performance as a woman fulfilled in her career but finds her calling in being a wife and mother. Dingdong Dantes works hard to go beyond his good-looking exterior to assert his acting skills. There is good chemistry between Maricel and Dingdong. They make you believe that this young, virile hunk can actually fall for this overachieving, older woman.

The conflicts arise as the narrative jumps over 10 years, to show that they are now a family. Millet is perfectly content being a stay-at-home mom and homemaker-wife. Millet doesn’t let herself go, she is mindful of looking good and staying healthy; she doesn’t neglect the home, she makes sure that her husband and child want for nothing; she supports her husband in all his endeavors and actively tutors their son who has a learning disability. She also keeps her father at bay whenever he comes at odds with Anthony.

But what exactly is Millet’s father, Henry, angry about? He says that marriage has stunted his middle-aged daughter’s professional growth. But even though she has made choices to give up her career for her family, she does not seem unhappy or discontent. Anthony may not be from a top university nor is he an exemplary engineer, yet, he is able to provide for his family enough that they are comfortable and, more importantly, happy. He is gainfully employed, he does not maltreat Millet, and he is not irresponsible. Yet, Henry still spews hate at the sight of him. For many scenes, this disappointment is the recurring theme—and eventually, it gets old very fast.

The problem is the “missing decade.” I was waiting for flashbacks or even flashes of the courtship between the two. If this comes later in the narrative, it does not show hints of it now. Questions arise as to how Millet and Anthony fell in love—surely, the nature of their dramatic meeting is not enough. And why is there a gap of ten years? Because it’s a good, round number? Why not have these problems crop up after less time, maybe at the cusp of the proverbial 7 year-itch? At this juncture, it seems, the couple has been living in a bubble of bliss and marital problems only popped up after a decade. More likely, it is to jump to set up in a hurry the circumstances where Anthony meets a younger woman that he sees fit to be his wife too.

Much of the exposition in the series is said, not shown. And said in long monologues so characteristic of Pinoy soap operas. More time could have been spent building up these situations: that Henry has been belittling Anthony throughout the years, that Sonia has been tolerating this behavior until it has built up to the present, that Millet has been exhibiting one or two annoying habits that irk him.

When Shiela (Lovi Poe) walks onscreen, you expect her to come with her own spotlight trained only on her. But the only remarkable thing is that the moment is rendered in slow motion. Shiela is described as independent, but she has yet to exhibit enough spunk to make her more favorable compared to Millet.

The chance encounter of Anthony and Shiela shows how the young woman helped her. It does not directly mirror the circumstances surrounding Anthony and Millet’s first encounter, but it does seek to establish that Anthony is a helpful person. Yet, Shiela goes back to her home in Cebu without being introduced to her knight in shining armor. The question of how they meet again and eventually fall in love is still a question. But the bigger issue is this: what exactly happens that Anthony is led not only to have an affair but to marry Shiela?


It is a challenge for the writers of Ang Dalawang Mrs. Real to show what could possibly motivate Anthony to have two Mrs. Reals.


He already has a loving wife who cares and supports him, takes care of the household and family, and is mindful about keeping herself attractive. Without losing her identity, she has focused her attention on building a warm home.


During the advanced screening of the show held at the GMA Network office, there were a lot of questions left unanswered in the story so far.

In any case, I’m going to be tuning in to Ang Dalawang Mrs. Real, which airs on GMA-7 weeknights at 9:30 p.m., if only to satisfy my curiosity.