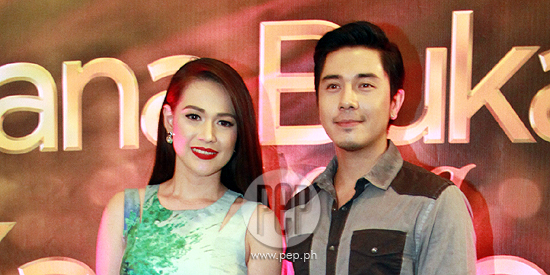 A daughter of a chocolate factory owner, Rose works as one of the top executives in the company.

She is undoubtedly brilliant with her work yet painfully awkward with her appearance and social skills.

This is where the initial conflict comes in as Rose’s step-sister Zsa Zsa (played by Maricar Reyes) is not only beautiful and confident, but also driven with high ambitions.

Adding fuel to their rivalry is the arrival of Patrick (played by Paolo Avelino), a dashing and talented chocolatier who will captivate both their hearts.

UGLY DUCKLING AGAIN? Bea’s portrayal of an ugly duckling is a bit reminiscent of her previous title role in I Love Betty La Fea where she was paired with John Lloyd Cruz.

Incidentally, Bea and Maricar briefly worked together on the same soap.

But this time, it’s interesting to see them clash given Bea’s usual flair for drama and Maricar’s good grasp of her kontrabida role.

Paulo, on the other hand, makes a good leading man for Bea because of their fresh team-up.

Paulo’s mysterious and charming character complements the socially awkward Bea in the soap.

From the very start, their onscreen chemistry is apparent and it just might provide sustaining appeal to viewers.

STORY OF REVENGE. The premise of Sana Bukas Pa Ang Kahapon is a typical Pinoy teleserye that centers on complicated family relations, love, and deceit.

As seen in the soap’s full trailer, what makes it exciting is the tragedy that will set off a series of unexpected events in Rose’s life.

She will reach a point where she’ll be forced to take on a different persona in order to survive and take revenge against the people who betrayed her.

It’s not exactly an original story line, but the challenge there is how the cast will bring life to the story and keep the viewers wanting for more every single night.