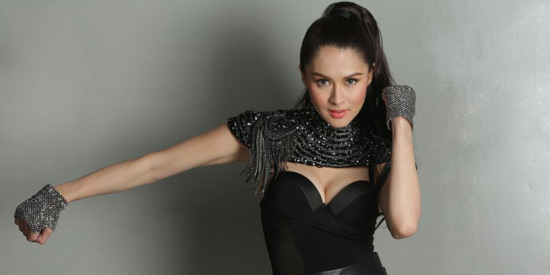 Marian Rivera (in photo) can be considered this generation’s dance queen, just as Vilma Santos, Alma Moreno, and Maricel Soriano were in the past.

Directed by Louie Ignacio, the new GMA program featured dance numbers with production values that are the regular stuff of entertainment shows.

For the opening number of Marian, the production went all out with the props, set design, and costumes. It was, it might be said, a glittery affair.

Marian took to the stage and owned it, although it seemed that, in a few portions, she was tentative.

Marian Rivera can rightly be considered this generation’s dance queen, just as Vilma Santos, Alma Moreno, and Maricel Soriano once were in the past.

Paolo Ballesteros co-hosted the show, looking dapper in his dark suit. But he needs to be provided in future shows with a proper monitor because he was practically yelling into the microphone, which didn't jibe with the showbiz-glam and high glitter of the show.

To introduce Maricel Soriano, the show did a countdown of top three dance hits from the not-so-distant past, giving Marya (Maricel's nickname) a chance to prove that she could still move to the beat of the 1980s.

Singing along with the songs, Maricel looked like she was genuinely having fun. And although some steps in the end were a bit wayward, she breezed through the numbers with enough confidence for the mistakes not to matter.

Marian, who joined her onstage, also looked confident and comfortable during this dance routine.

What followed was a short tête-à-tête with Maricel, drawing some attention to Marian’s real-life boyfriend, Dingdong Dantes, who is Maricel’s partner in an ongoing soap opera, Ang Dalawang Mrs. Real, airing on the Kapuso Network.

This was also a good way for Batangas Governor Vilma Santos-Recto to stage something of a comeback in dance, in a number with Marian choreographed to Jessie J’s “Domino.”

Again, Ate Vi looked like she was actually enjoying her time onstage, which made the performance enjoyable and engaging.

By this time, Marian had shown her audience that she was pretty comfortable performing contemporary dances.

Ate Vi and Marian’s interview was interesting, as their mutual admiration shone through.

Parallels were drawn between their career paths and, at some point, Marian picked up “gossip show” questions. She asked Vilma about her past and present loves, as well as her political plans.

The whole Q&A session worked out well, with Marian showing she was a capable interviewer. No doubt this was helped by the fact that Marian was at ease with her two subjects: the Diamond Star and the Star for All Seasons.

A small point: Marian can learn a little more about having fun while dancing onstage from her very well-established guests on this pilot episode. Dancing may be hard work, but this doesn't have to show.

Marian also did a bit of hosting, and it is in this area that she clearly needed a bit of work. Sometimes she was obviously reading from a prompter!

I would like to see more stripped-down performances on the show, ones not relying overmuch on elements of glitz but ones highlighting movement and dance.

After all, the show is definitely a good medium to encourage a better appreciation of dance over and above the usual weekday and Sunday noontime fare.

Maybe Marian can also have a segment where she teaches dance steps or whole routines?

Since she is a media darling, Marian can certainly put her own spin on the usual television dance formula.

All told, the show is a very promising one, offering something different from other shows in the same time slot.

Marian airs every Saturday on GMA-7 after Pepito Manaloto.