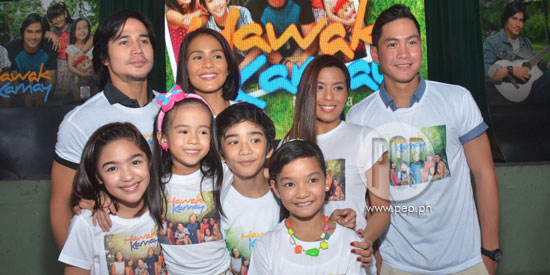 Piolo Pascual says working with kids is refreshing for him, which is why he is excited to work on ABS-CBN's upcoming teleserye, Hawak Kamay.

In the said series, Piolo will be working with child stars Zaijian Jaranilla, Xyriel Manabat, Andrea Brillantes, and Yesha Camille, a newbie actor who was under the mentorship of Piolo in the Promil Pre-School i-Shine Talent Camp. 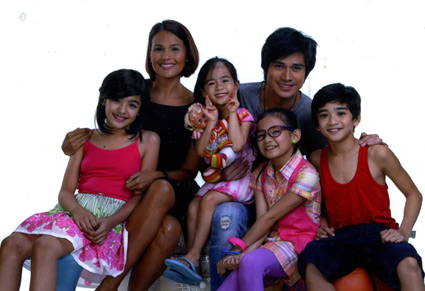 “It’s a blessing. My son is already a teenager so working with these kids is something new.

“For me, when I worked with Zaijian and Xyriel when I played a [mentally retarded person in the movie 24/7], it brought so much awareness, especially knowing these kids nakakatrabaho na.

“Ang sarap lang. I have so much admiration for them.

“Nare-refresh ako every time I work with kids.

“I guess I’m fortunate to be given this kind of work, blessing from ABS-CBN to be working with the superstars that we from the station,” said Piolo in an interview during a charity event heldat Hospicio de San Jose on Tuesday, June 24.

He also added, “I always welcome challenges and I always want to work with new kids, ang sarap lang kasi because you see them grow through your leadership.

“I hope it has an impact one way or another sa buhay nila.”

Hawak Kamay details the story of a beat down man named Gin (Piolo), who has dreams of making it big as a musician and is faced with various challenges that may make or break his belief in himself and in the value of the relationships.

He begins the story by the side of the woman he loves, Me-Ann (Nikki Gil), and is joined by three parentless children namely Emong (Zaijian), Harriet (Xyriel), and Ningning (Yesha Camille). Their situation unfolds under the watchful eye of the estate executor, Atty. Bianca Magpantay (Iza Calzado).

As time passes and the situation growns deeper, Gin finds himself developing a different sort of attachment to the three children, and decides to get his act together for them.


The actor said about his character Gin: "I play a frustrated musician. A guitar player who gets to adopt...he gets to be a guardian of these kids so medyo rough and rugged. Magulo ang buhay niya."


Has he ever considered adopting a kid? "I grew up visiting orphanages through my parents and we've always been fond of kids...That's a blessing but it's also a blessing to have your own [child].


(Watch video: Wanted: Woman for Piolo Pascual to have a kid with)


ON AMALIA FUENTES. During the awards night of the 37th Gawad Urian, Piolo served as the escort of Amalia Fuentes when they were tapped to become presentors that night.

Amalia held on to Piolo's arm as she gushed about him and even declared that, "Ang favorite actor ko si Piolo Pascual."


Piolo kept on smiling as the crowd clapped and cheered her on.


During the Hawak Kamay event, Piolo was visibly flattered as he recalled the attention lavished on to him by the veteran actress.


"Even my mom was kilig when she found out about it."