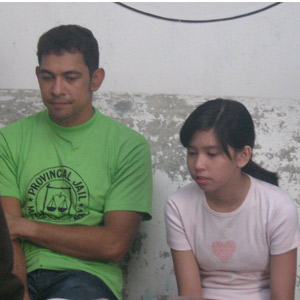 Alex Ramos (played by Gary Valenciano) suffers a grave injustice when he is jailed for a crime he did not commit. The December 14 episode of Maalala Mo Kaya tells the moving story of a father who finds freedom because of his daughter Rose (played by Maureen Guese, right).


On Friday, December 14, Gary Valenciano will be showcasing his dramatic skills for the small screen via Maalala Mo Kaya. This pre-Christmas special of MMK also marks the return of Gary V to MMK after 12 years. His first appearance on the show took place in the late ‘90s.

In the upcoming episode of the ABS-CBN anthology show, Mr. Pure Energy will be playing Alex Ramos, a man who is convicted of a crime that he did not commit. His wife Sheryl will be played by the dusky actress Angel Aquino.

The episode is based on the life story of someone who was wrongfully accused of committing a crime and was punished with almost four years of incarceration. The key to Alex's freedom is his 14-year-old daughter named Rose. This pivotal role is portrayed by child star Maureen Guese, who was part of the musical The Lion, The Witch and the Wardrobe some years ago.

"Acting has always been a real challenge for me," admits Gary V. "Coupled with the fact that I play a character, I don't get to act much anymore. This was a choice I made sometime ago but perhaps now would be a good time to keep my doors open for opportunities to do something out of the norm."

Gary reflects, "I think the episode is one that can help strengthen the bonds of family members with each other. I still cannot imagine the extent to which the daughter took to help her father."

The MMK episode, directed by Ruel Bayani, talks about the relationship of a young girl and her father. The story shows how the family overcomes difficult circumstances and how their faith and perseverance carry them through all their trials and challenges.

"MMK is always associated with heavy drama and tears but it also is a magnificent show with magnificent moments that many times affect people in more ways than the producers of the show really know. There will be drama, tears, moments but most of all there are rewards too. It's a true to life story that I hope leaves a mark on the viewers' hearts," says the singer who was named as one of the most admired TV personalities by the Anak TV Seal Awards.

SYNOPSIS. Alex Ramos is a family man who is a father of three children. The native of Plaridel, Bulacan, is arrested and jailed for a crime he did not commit. He is detained for almost four years. His second child, 14-year-old Rose (Maureen Guese), helps her father regain his freedom.


To provide his own interpretation of the role, Gary chose not to meet the real Alex Ramos at first so he could internalize his character without outside influences. See how Mr. Pure Energy tackles his role as a man falsely accused of a crime in ABS-CBN's anthology show.