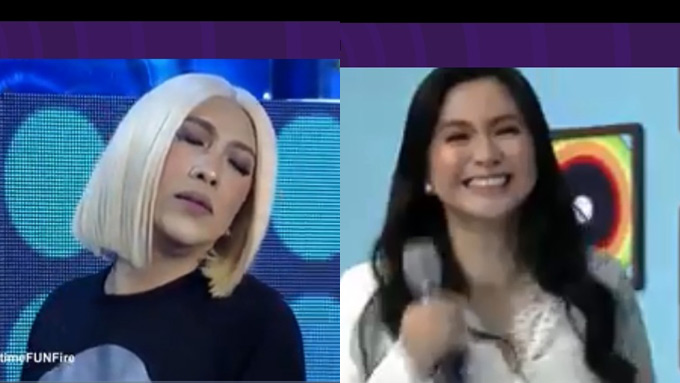 Vice Ganda criticized a DJ on It's Showtime because he said the music was not suited to the mood of the show.

For the compatibility game KapareWho, Vice Ganda was about to sip on the straw of a drink offered by Ate Girl Jackque.

However, Vice Ganda was not thrilled about the music played by the DJ.

After the DJ changed the music, Vice Ganda was still displeased, and shouted, "Diyos ko!"

The It's Showtime host then suggested, "May kilala akong magaling na spinner. May trabaho lang ngayon."

Vhong Navarro asked Vice Ganda to give the name of the spinner.

The game show Wowowin airs on GMA-7 early in the evening. As Wowowee, it was for years the top noontime show on ABS-CBN, with its host Willie Revillame its top draw.

The camera then panned to show the reaction of Mariel Rodriguez who laughed out loud at Vice Ganda's joke.

The wife of Robin Padilla pointed at the current DJ and said, "Ang galing kaya nito..."