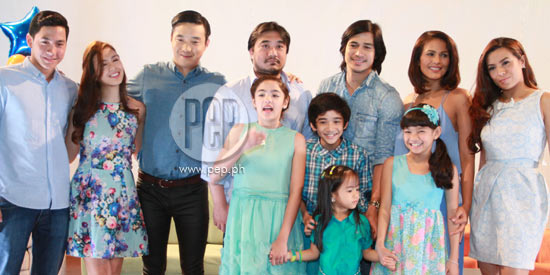 Piolo Pascual says working with kids in Hawak Kamay is refreshing because there’s no love angle in the story.

In this ABS-CBN teleserye, Piolo is cast as Gin, who will try to prove that he can be a guardian of three orphaned kids (played by Zaijian Jaranilla, Xyriel Manabat, and Yesha Camile).

Playing a father role is not a problem, said Piolo during the press conference of Hawak Kamay last Friday, July 18.

“What prepared me is the fact that I’m already a father,” referring to his real-life experience as a father to 17-year-old son, Iñigo.

“It’s quite easy because I also grew up with so many pamangkins.

“Siguro the only challenge there was to play the guitar.

“I don’t know how to play the guitar.

“I had to play the guitar and sing at the same time.

Since they’re dealing with kids, who are under strict labor rules, Piolo said the only challenge for him was to wake up early.

Other than that, the actor said everything is fine on their set.

He recalled, “When I worked with Zaijian and Xyriel in 24/7 in Love, where I played an MR [mental retard], I saw how contagious it is to be around kids and how to act like them.”

Work takes on a different meaning when one is surrounded with kids, according to Piolo.

“They are committed, they deliver, so I try to look at my work in the eyes of a kid para mas ma-appreciate ko ang mga ginagawa ko.

“It’s easier for me to level with them kaya mas nag-e-enjoy po ako.”

Since the series will already begin airing on the primetime block this Monday, July 21, Piolo said that he might not be able to work on other projects, especially a movie.

Aside from Piolo and the kids, other cast members include Iza Calzado, Nikki Gil, Ryan Bang, Victor Neri, Axel Torres, and Sofia Andres.