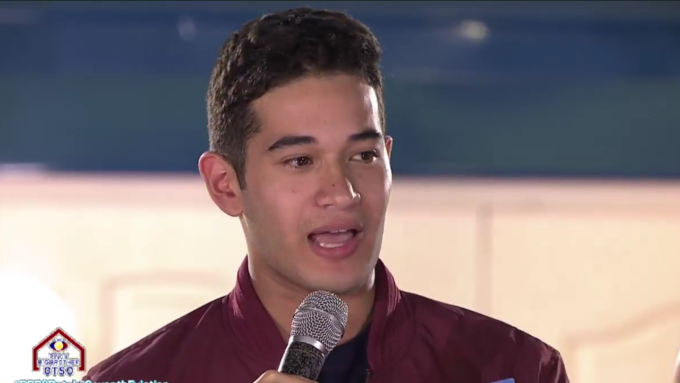 The 19-year-old college athlete from Isabela left the house after losing the public voting versus four other nominees: Lou Yanong, Andre Brouillette, Shawntel Cruz and Thea Rizaldo. Hanie only took 5.09% of the total SMS votes. This was lower than Lou’s 37.07%, Andre’s 25.65%, Shawntel’s 17.54% and Thea’s 14.65%.

HOW THEY WERE NOMINATED.

The first two nominees that were announced were Shawntel Cruz and Andre Brouillette. Both were automatically nominated as a consequence of being in the losing team in last night’s second big battle.

Hanie was nominated in a normal nomination round, along with Lou Yanong and Thea Rizaldo. He got 10 nomination points, which is the highest for this round. He was nominated by Kim, Thea, Lou, Yamyam Gucong and Andre for not listening to advice and showing his frustration during the challenge.

Lou got 8 points. She got nominated by Shawntel, Fumiya, Camille Sandel, Yamyam and Kim Franco for not being focused on the task and being clingy to Andre.

Thea, lastly, got 5 points. She was nominated by Lou, Kim, Andre and Hanie for trying to take over in the task.

There were several important announcements made during the show.

First, this batch of adult housemates will all exit the house at the end of two weeks. They will be replaced by the second batch of teen housemates.

Then this coming week will be the start of the big jump challenges to determine the Big Four of adult housemates Batch 1.

At the end of this week, one of the remaining housemates--Fumiya, Yamyam, Lou, Andre, Shawntel, Thea, Kim, and Camille can win the Big Jump challenge to become the first member of the Big Four.

Who will win this challenge? Viewers will find out next week.