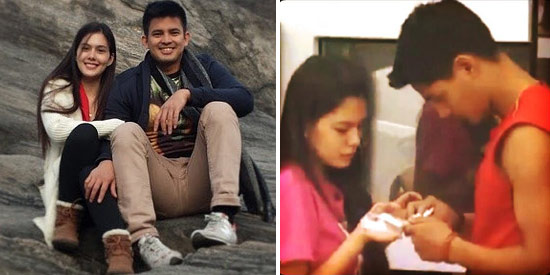 Vice Ganda entered the Big Brother house recently to talk with the Pinoy Big Brother All In housemates. The comedian-TV host was concerned about Vickie Rushton, the girlfriend of Jason Abalos whom he described as “tuliro” because of her mixed emotions while contemplating the status of their relationship.

The Showtime host had the chance to drink wine and bond with some housemates during the June 22 episode of PBB All In.

Vice Ganda asked Vickie if she is happy and she responded by saying that she has realized a lot of things during her stay in the closely monitored house.

Does she miss Jason?

The Fil-British model smiled as she said, “Oo naman.”

At this point, Vickie opened up by recalling Jason’s text message to her:

“Baba, ok lang naman ako. Wag ka mag-alala. I miss you so much. Praying for you always.”

Vickie pointed out back then upon reading the text message: “Wala nang I love you. Wala na kami, ganun.”

When asked if she knows why Jason’s message was “dry,” Vickie said: “Hindi pa.”

Vickie is being linked to fellow PBB All In housemate Daniel Matsunaga with some fans dubbing their tandem as “VimNiel” and “DanKie.”

The TV host-comedian then commended both of them for knowing their boundaries.

Daniel defended himself by saying that there is nothing romantic going on between him and his fellow housemate. “Grabe naman, wala akong ginagawa!”

“Ako yung side ko, single ako. Siyempre, of course, kapag may boyfriend ka, I’m not gonna flirt with somebody who has a boyfriend.”

Vice Ganda asked: Did you flirt with her?

“Never,” declared Daniel. “I give respect.”

At that point, Vice Ganda noticed a red bracelet that Vickie was wearing. It turned out that it was from Daniel, prompting the housemates to erupt in fits of laughter.

TEARFUL CONFESSION. During the June 23 episode of PBB All In, Vice Ganda was given the authority to choose who among the housemates would be allowed to send three text messages to anyone outside the PBB house.

The Kapamilya TV host-actor chose to give this opportunity to the 21-year-old housemate dubbed as “Lady Mahinhin ng Bacolod.”

Inside the confession room, Vickie tearfully opened up to Kuya about her feelings.

Vickie spent time with Loisa as she drafted the message that she would send to Jason.

Kuya then asked if she thinks something has changed in their relationship.

MESSAGE FOR BF JASON. At that point, Vickie read out loud her message for Jason:

Big Brother then asked her why she changed her mind and included ‘I love you’ as part of her message.


A month ago, Jason shared a photo of them together and provided the caption: “Absence makes the heart grow fonder... i miss you...”