ANATOMY OF A PINOY TELESERYE: GMA-7 actresses open up about dealing with TV ratings 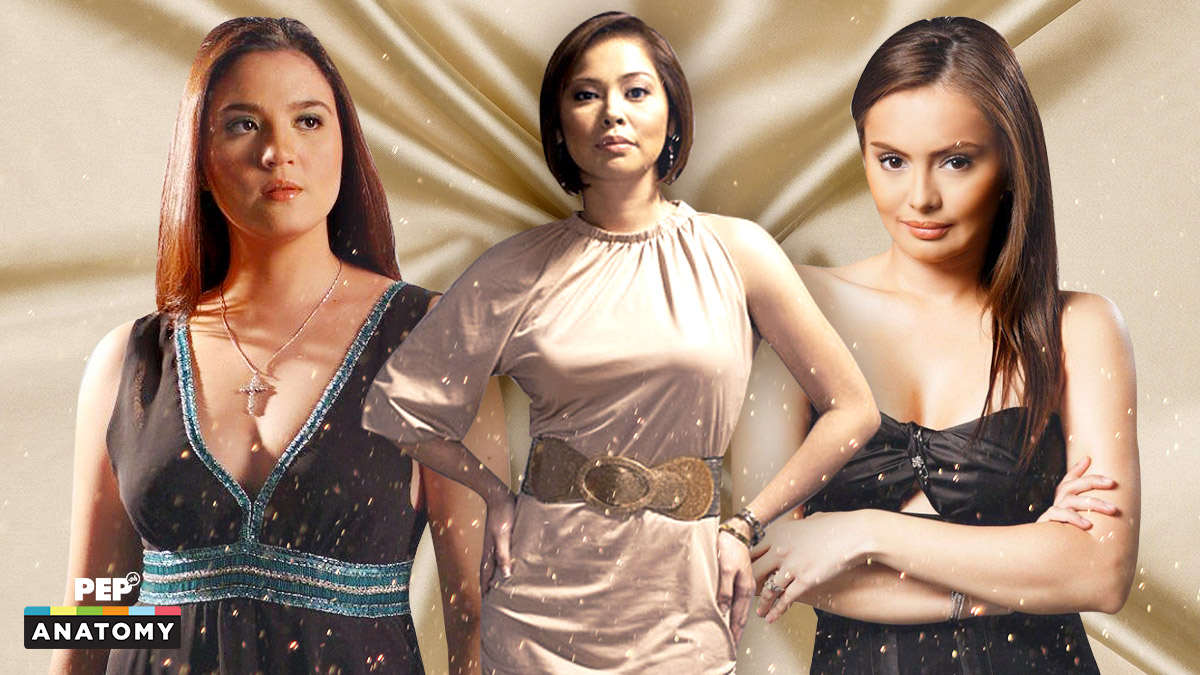 TV ratings are an important aspect of a Pinoy teleserye or any TV show for that matter.

In fact, TV ratings can serve as the barometer to gauge the performance and life span of a TV show.

In the Philippines, TV networks rely on the services of two TV ratings providers: AGB Nielsen and Kantar Media.

Still, TV ratings are often used as the basis to determine if a show will be extended or cut short.

This was discussed thoroughly in the first installment of PEP.ph (Philippine Entertainment Portal) special report, ANATOMY OF A PINOY TELESERYE, where business unit heads revealed how they get feedback for their shows: from ratings to social media to focused group discussions.

Pinoy teleserye actors and actresses are also affected by audience feedback, especially those coming from social media or the increase/decline in viewership as reflected by TV ratings.

For '90s actresses Sunshine Dizon, Angelu de Leon, and Angelika dela Cruz, their way of dealing with audience feedback has changed through the years.

In the second part of ANATOMY OF A PINOY TELESERYE: FROM THE POINT OF VIEW OF GMA-7 ACTRESSES, Sunshine, Angelu, and Angelika open up about their experiences regarding TV ratings and audience feedback.

Sunshine, Angelu, and Angelika give their observations as to how teleserye production has changed over time. They also talk about their vision for the future of Pinoy teleseryes. 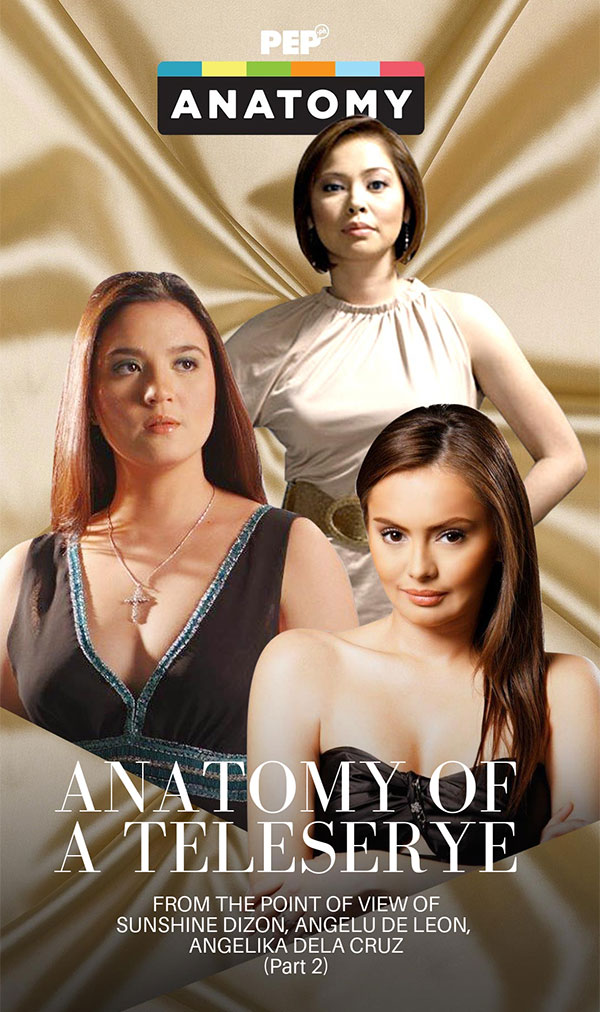 Through social media, Sunshine, Angelu, Angelika, and other celebrities can get direct feedback and comments from fans, viewers, and even critics of their TV shows.

This was how Angelika got feedback for her performance in Ika-6 Na Utos. 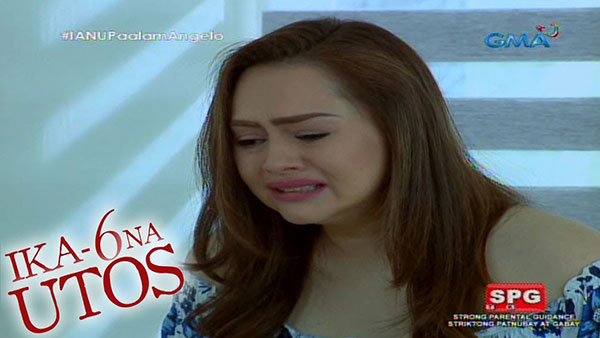 In the past, these three actresses were not made aware of the ratings performances of their shows.

Sunshine recalls that in the past, "Hindi nila sinasabi sa amin 'yan."

Sunshine recalls what happened to Anna Karenina, her first teleserye with GMA-7 and VIVA Television, which ran from 1996 to 2002.

Anna Karenina is considered as the longest-running weekend drama series in the Philippines to date. 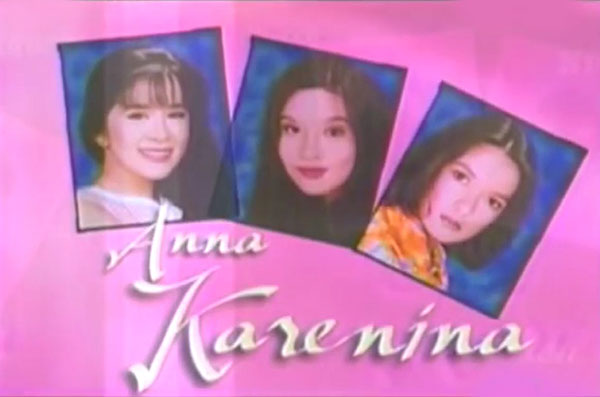 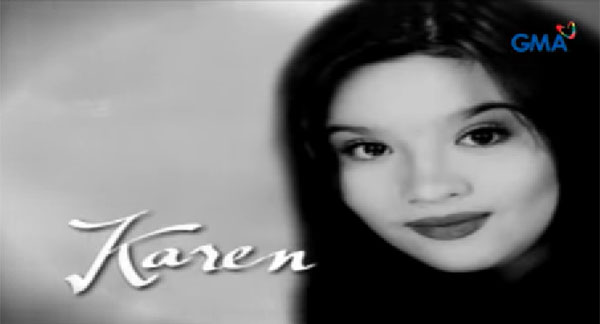 Angelu points out that in the past, the stars of a show were not really involved in other aspects of a teleserye, such as marketing and TV ratings.

"Even artistas ngayon, it's so hard because even if you have a manager, unlike before, the manager works for you, media and everything. Ngayon, you also have to work." 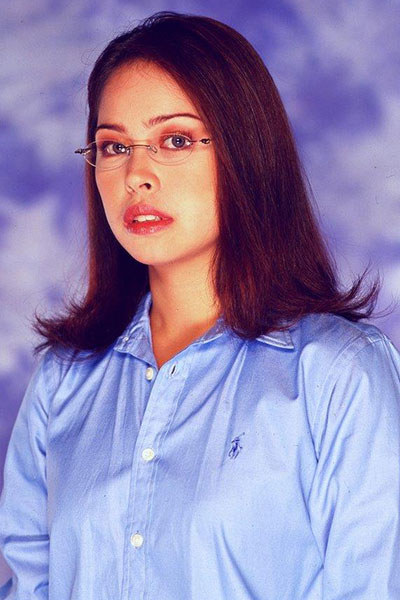 It may be noticed that since the existence of social media, producers and TV networks announced their ratings game victories through artcards.

"Kasi sabi ko, to each his own, meron namang kasing kailangan, kasi pinapapost. That's the reality of it, may ganun talaga.

When they learn about the TV ratings performance of their show, does this affect their performances as actresses?

"Kasi, the mere fact that they would send us the comments and the ratings—may ganun kapag bago yung show. 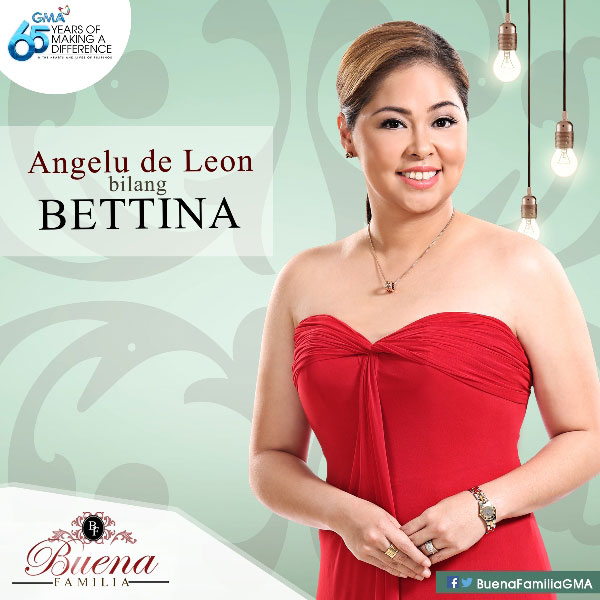 Still, Sunshine believes that the ratings performance of a show shouldn't be part of an actor's job.

She explains, "Pero ako, in a perfect world, sana hindi.

"Ako, that's how I view it, na we can only do so much, hindi na namin hawak ang utak ng mga audience kung kakagatin nila yung story or hindi, di ba?

"Pero, as actors, our concentration should be our characters and the story.

"I mean, feedback, fine with me. Pero ratings? How can we, as actors, predict that?"

Angelika adds that when it comes to reading feedback from viewers, she also knows when she should get affected.

One major change in the production of a Pinoy teleserye involves its life span.

In the late '90s, a teleserye could be aired for two or more years on television before ending its run.

However, in the mid-2000s, this trend changed, and TV shows usually aired for one season, or 13 weeks.

Of course, this trend has an impact on the storytelling made on the show. 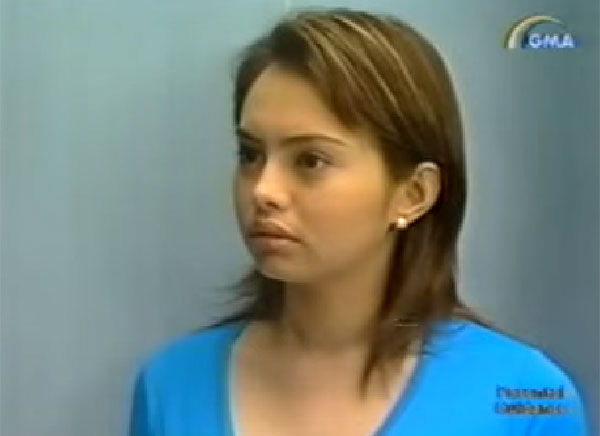 Sunshine believes that this change follows the pattern of Korean dramas, which usually completes its run after 20 episodes.

Now, teleseryes can get cut short to less than 13 weeks if ratings won't improve over a given period of time.

Long-running shows have become a trend again on television. A supposed 13-week show could get extended for a year or more, especially if it is performing well in the ratings game.

This happened to Sunshine's Ika-6 Na Utos, which was supposed to run for only six weeks. 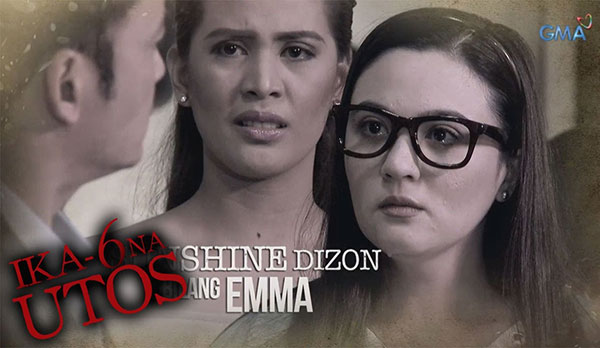 Sunshine says about this, "Pero ako, personally, ha, in a business perspective, why would you cut something that's earning and good?

"Hindi ka mahu-hook, e. At saka ako, I believe you cannot develop a story in three, six weeks? How can you do that?" 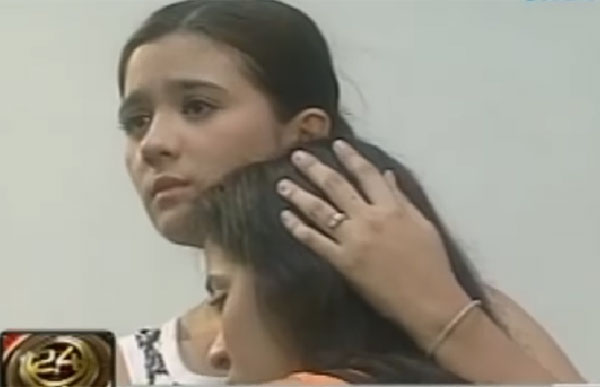 Angelika recalls that the mindsets of artists were different when teleseryes lasted for as long as one to two years.

Sunshine, Angelu, and Angelika also know when and how to get involved regarding the development of their characters in a TV show.

Angelika admits that she always collaborates with her show's writers regarding her character.

Angelika cites her interpretation of her character in Ika-6 Na Utos.

In that series, which ran from December 2016 to March 2018, she played Geneva, the elder sister of Georgia (Ryza Cenon).

However, her character came in the middle of the series, around June 2017. 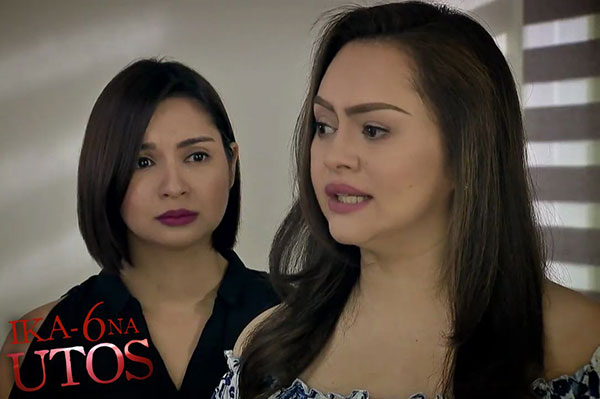 The reason for this, Angelika says, is that she needs to give her character a distinct mark, differentiating her role from other characters, especially those of Georgia and Emma (Sunshine Dizon).

Angelika says she enjoys playing a kontrabida, especially when she can add her own interpretation. This is what happened to Ika-6 Na Utos, where she created a subplot for her character and Emma's daughter, Sydney (Angelica Ulip). 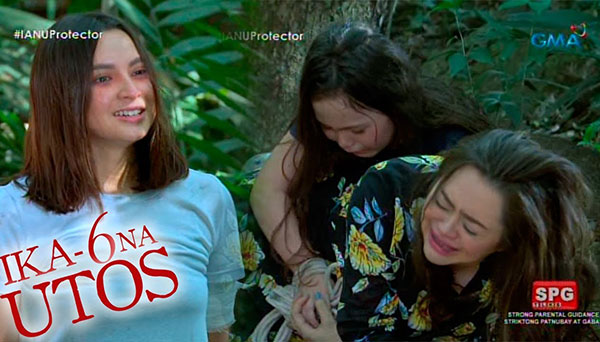 In Inagaw na Bituin, Angelika was given the freedom to give her own interpretation of her Lucy character. 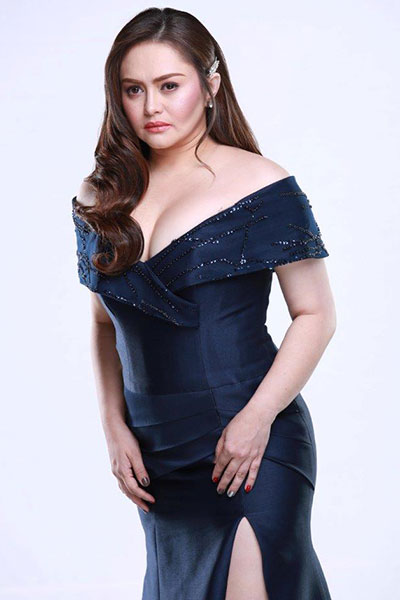 Sunshine says that she only becomes involved with her characters when she’s given the freedom to do so.

She tells PEP.ph, "Kung pwede. I mean with scripts, sometimes you can suggest.

Tatay G is Gil Tejada Jr., Sunshine’s director in most of her TV shows, including Anna Karenina.

Sunshine adds, "At saka, most of the writers kasi from VIVA, napunta din dito sa 7, e. So, parang na-carry over.

With Sunshine’s Ika-6 Na Utos character being the most notable role she did on television recently, were there times when she questioned the character’s motives and intentions?

"If it doesn't really fall into the parang, continuity or na-off character, I would really say something. 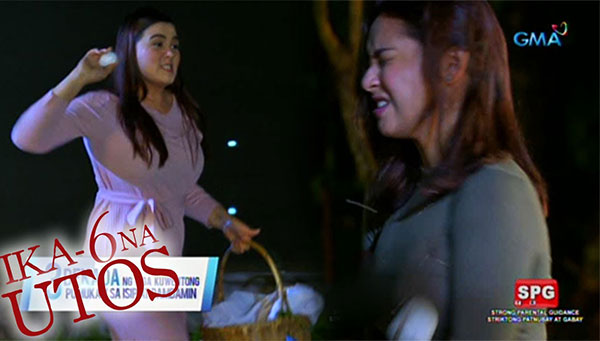 Given this attitude, Sunshine quips, "Sometimes, I would get in trouble.

THE FUTURE OF TELESERYES

Given the ever-changing landscape of television, Sunshine, Angelu, and Angelika have their own visions regarding the future of Pinoy teleseryes.

Sunshine points out the need for Filipino TV shows to evolve amidst the existence of over-the-top (OTT) platforms and on-demand streaming services.

"Pagandahin pa, quality over quantity, kasi parang inevitable nang eventually, the apps, all these digital things will take over, which is happening, unfortunately.

Sunshine, as an actor, admits that she has observed the declining TV audience.

"So, kailangan talagang magcompete ang networks to fight for that spot.”

Now, Sunshine has also ventured into creating digital projects via Mystified, which is the first original iFlix movie in the Philippines.

Mystified is produced by Sang’gre Productions, Inc., the own production house that she owns along with Encantadia co-stars Iza Calzado, Karylle, Diana Zubiri, and director Mark Reyes. 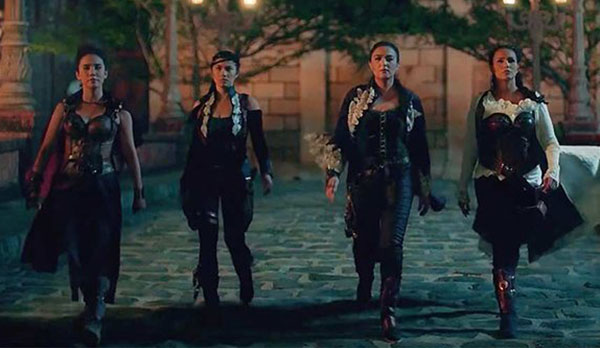 Sunshine says about this, "Alam mo, ako, I'm a very adjustable person. If networks still need me, then I'm with them.

Angelika, who admits to being a fan of Korean dramas, hopes Pinoy teleseryes can level up some more in terms of quality and production values.

In the next part of PEP.ph's special report, Sunshine, Angelu, and Angelika reveal notable experiences in their careers as Pinoy teleserye actresses.

To read the first part of this report, click: ANATOMY OF A TELESERYE: From the point of view of GMA-7 actresses

To read the first installment, click: ANATOMY OF A PINOY TELESERYE: How do ABS-CBN and GMA-7 produce their teleseryes?