Jason Abalos tells girlfriend Vickie Rushton: "God knows how much I love you!" 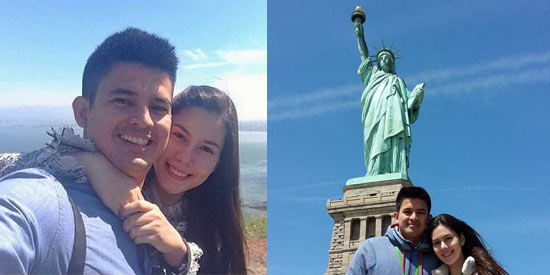 As part of the YOLO (You Only Live Once) theme, the housemates of Pinoy Big Brother All In got the chance to have special moments during their time on ABS-CBN’s reality show.

Jason had a chat with Big Brother before meeting with Vickie.

He described Vickie as an idealistic girlfriend who compares relationships with those depicted in movies, TV shows and novels.

Holding a bouquet of flowers in his hands, Jason approached Vickie who was waiting for him at the living room area.

The couple hugged each other tightly. Vickie greeted her beau, “ang payat mo.”

The couple hugged and held hands as they spent time together.

PINKY SWEAR MOMENT. Jason took this opportunity to ask Vickie why she started to have doubts about their relationship.

Vickie said that he might not have liked the fact that she revealed the way Jason treated her in the past.

But the actor said that he didn’t mind because it made him realize his shortcomings as a boyfriend.

After making amends with each other, the lovely couple did a “pinky swear” by intertwining their fingers together.

The couple then met with the other housemates briefly.

Jason then talked with Daniel Matsunaga, who is being linked to his girlfriend while inside the PBB house.

Big Brother had separate meetings with Jason, Vickie and Daniel.

Jason disclosed to Kuya that his respect for Daniel deepened.

As for Daniel, he admitted to Big Brother, “Siyempre, Kuya masaya ako para kay Vickie. Good thing they fixed everything, masaya si Vickie ngayon… Masaya because he believes in me po. Everything is ok.”

When Vickie was called in by Kuya, she told him that the experience taught her to learn to be more trusting. “Natutunan ko… dapat magtiwala din po at huwag pong mag-isip ng negative na bagay…Pagwo-worry yung po mismo ang nagpapalala ng mga bagay-bagay.”

LATEST EVICTEE: FIFTH PAGOTON. Before announcing the latest evictee, the PBB hosts mentioned that a “back-to-back-back” eviction would continue to take place until Tuesday with the housemates voting each other off face-to-face.

Kuya asked Fifth what was the most important lesson he learned during his stay.

“Maging totoo sa mga taong nasa paligid mo,” said Fifth, who admitted on the show that he is bisexual.

Fifth was very emotional when he was reunited with his twin brother, Fourth.


IS MANOLO THE NEW EVICTEE? During the August 3 episode of PBB All In, the housemates were made to do "Harapang Eviction." They had to put one or two balls, representing nomination points, inside a housemate's bag as they openly explained their reasons for voting for them to be evicted.

After tallying the votes, Manolo Pedrosa got six points but it was revealed that he would continue to stay inside the PBB house.

There will be other housemates who will be up for eviction and these chosen housemates will need to undergo a challenge.

The winner of the challenge will be saved from eviction while viewers will decide what will happen to the housemates who will lose.